Thoughts on the “Authority” of the Bible

Thoughts on the “Authority” of the Bible October 27, 2012 James F. McGrath

There are many people who toss around phrases like “the authority of the Bible” without giving sufficient thought to what they are saying – much as we have seen politicians toss around the language of “God's will” with insufficient prior theological reflection. And so here are a few thoughts on the subject of “Biblical authority” which I hope will generate discussion. 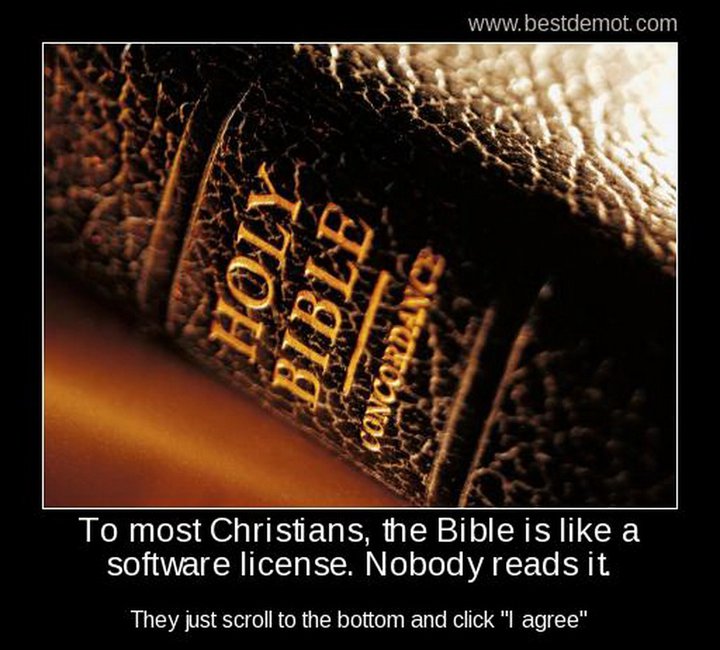 1. The Bible is not inherently authoritative, any more than the Qur'an is, or the Code of Hammurabi, or any other text you might think of. These texts all exist in the world, but until people actually read them and grant them authority through an act of their own wills, the texts are merely there, powerless. The Enuma Elish was presumably once authoritative in some sense for someone – but now most people have never heard of it, and those who have grant it no authority. And so it is, as has always been the case, people who make these texts authoritative, not the other way around – whether one has in mind the status accorded to the contents by the church in assembling the canon, or the acceptance of that decision of the church by later individuals.

2. If you do not make the effort to understand the nuances of the languages in which the Bible was written, and the cultural background assumed by the Bible's authors and readers, then inevitably you will end up not reading the Bible, but instead reading your own concerns and culture into the Bible. There is no way to avoid that without a concerted effort, and even then it is not entirely avoidable. There are things in the Bible that we simply do not know how to translate, and others which, even though we can translate them, remain all but incomprehensible. And so keep in mind that, if you read in translation, you are delegating a certain amount of authority to the translators.

3. A text in human language cannot contain all the wisdom and insights of its human authors, to say nothing of divine wisdom and insight. And so the Bible should never be considered more authoritative than a human mind, should it?

4. Counterbalancing that last point, inasmuch as a collection of human minds is typically wiser than any one individual, any reading of the Bible that flattens its diversity of viewpoints reduces the wisdom embedded in it.

5. If you do not read the Bible, and understand the meaning of its words in their original context within the texts, and of the texts within their historical context, then you cannot say that the Bible is authoritative to you in any meaningful sense at all. But even if you do read the words, then as with any words, it is up to you to use them wisely. The Book of Proverbs warns that proverbs can be misused by fools. The same can be said about the Bible as a whole, and any part of it not limited to the proverbs.

6. The Bible only has as much authority as you grant it, and inevitably, there will be things in it to which you will not be willing to delegate authority. That is OK – more than OK, it is appropriate and normal. We see those who authored later parts of the Bible doing the same with respect to earlier parts of the Bible. Many mistakenly think that they can please God and get themselves off the hook by viewing the Bible as authoritative, deferring to others in an attempt to avoid responsibility and the potential blame that comes with it.

And so the truth is that the Bible has no authority other than what you give it, and since it contains diverse views and statements, there is no way to consistently grant all of it authority. And so it is your responsibility as a reader and interpreter of the Bible to take your own authority seriously and your own responsibility to be a wise and humane interpreter of these texts.

October 28, 2012 The Eternal Gospel
Recent Comments
20 Comments | Leave a Comment
"I haven't seen his new show, but my favorite segment on the old Colbert Report ..."
John MacDonald The Truthiness Will Set You Free
"Where do you get the notion that people "allow" themselves to be oppressed? It is, ..."
Michel At What Point Repentance?
"Please go through my three papers on 21st Historiography"
Sujay Rao Mandavilli History and Creative Writing
"Yes, Trump's example teaches us to always remember that people can passionately will their own ..."
John MacDonald Fox News is Full of Sith
Browse Our Archives
get the latest from
Religion Prof: The Blog of James F. McGrath
Sign up for our newsletter
POPULAR AT PATHEOS Progressive Christian
1