Why Vote for This or That Person for President?

Why Vote for This or That Person for President? October 13, 2012 James F. McGrath

It is sometimes assumed – rightly or wrongly – that people naturally vote for a candidate who most resembles them – in religious affiliation, appearance, background, and many other respects. A photo I saw on Facebook made me reflect on how true this may be, and whether it is how things ought to be.

It is rarely mentioned that, in one respect, Barack Obama is the most traditional candidate running in the quickly-approaching presidential election.

The majority of presidents and other public office holders in the history of the United States have been mainline Protestants. And Barack Obama is the only person who fits that category on the Democrat and Republican presidential and vice-presidential tickets. Romney is a Mormon, and both Biden and Ryan are Roman Catholic.

If it could be assumed that people naturally vote for “one of their own” (and that is a topic I intend to tackle further below), then we might ask why some Protestant voters don’t find Obama a candidate to whom they naturally gravitate. I wonder whether the t-shirt in the photo below, worn by a Romney supporter at a recent rally in Ohio, represents the motivation (acknowledged or not) of a very small, or of a disturbingly large, number of people. For how many people is it even a consideration that Obama has a different shade of skin than previous mainline Protestant candidates? 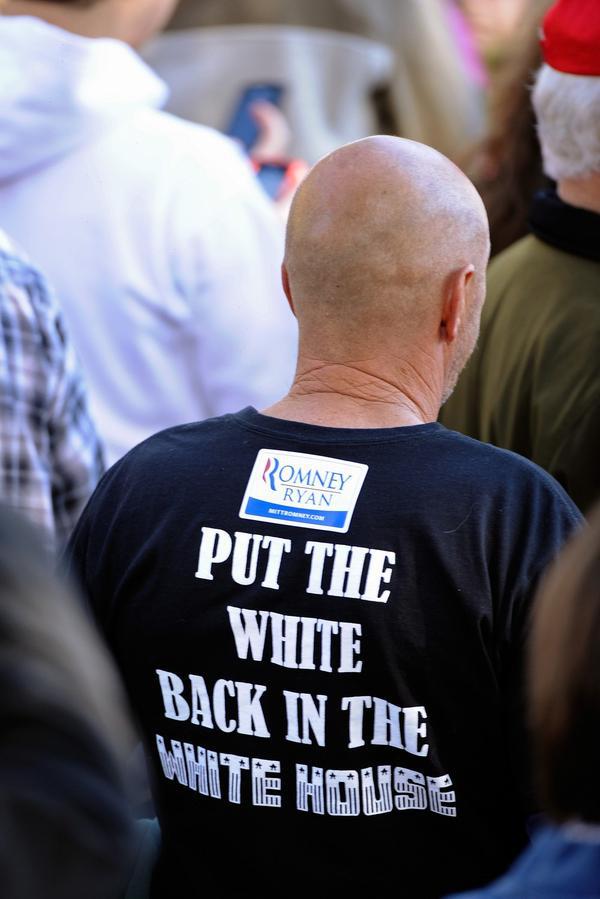 Lest anyone mistake where I am going with this, let me say that I am glad that, in so many respects, we have people as candidates for the highest offices in the United States government in this election who fit into categories which in the past have been underrepresented or simply absent, whether one is thinking of their appearance or their religion or anything else. My point is precisely to problematize all efforts to treat the question of who to vote for in terms of things that probably should not matter at all, and definitely ought not to be decisive.

This brings me to the question I asked in the title of this post: Why vote for this candidate or that one? I can think of a lot of bad reasons.

Don’t vote for a candidate because of the color of their skin, or that of their opponent.

Don’t vote for a candidate because the other candidate is a Mormon.

Don’t vote for a party you never paid attention to before, because otherwise you’d be supporting a Roman Catholic for vice president.

Don’t vote for a candidate because gas prices have been high, or for that matter because they have been low. The president does not have a lever in the Oval Office that controls that – does he?

Don’t vote for a candidate, or for his opponent, just because the economy hasn’t been doing as well as one might have hoped. The economy depends on a wide array of factors. One can and should support a candidate who stands for policies that one believes are best. But policies are not guarantees of a nation’s economic performance.

Don’t vote for a candidate merely because of the level of unemployment. Unless you want to support the Communist party and see employment controlled by the state, which could then not only ensure but require that everyone be given a job, then there is only so much that a president can do. And despite what you might have heard, unless you vote for the Communist party candidate, you won’t be voting for a communist.

I think it would be useful if most Americans were to take the time to actually look at what the President of the United States does and does not have the power or authority to do, and then vote for the person who they believe will perform the actual duties of the presidency most effectively, and will stand for policies which they support – keeping in mind that presidential support for specific policies is not the only thing that determines what happens in or to our country.

October 13, 2012 Dietrich Reinhart OSB Fellowship in Eastern Christian Manuscript Studies
Recent Comments
14 Comments | Leave a Comment
"And, of course, while demonizing the values of the rich and powerful, valorizing the slave ..."
John MacDonald The Social Status of Jesus
"There certainly seems to be some sour grapes against the rich and warrior values of ..."
John MacDonald The Social Status of Jesus
"Which church do you attend? Your language is atrocious, bless your heart."
Chari McCauley Calling Trump an Antichrist
"I was hungry and you fed me not... and so on. Those being condemned in ..."
Michel Calling Trump an Antichrist
Browse Our Archives
Follow Us!