Anthony Le Donne asked me to share this announcement about an upcoming speaking event of his:

The Gospel of Jesus' Wife: A Discussion of a Recent Biblical Controversy 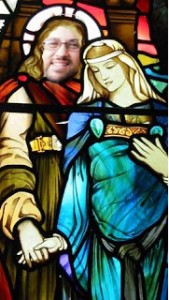 Dan Brown's 2008 novel “The Da Vinci Code” had a controversial premise – that Christian savior Jesus married and had children. The fictional book sold more than 80 million copies and was turned into a hit movie. It also was widely condemned by many religious institutions.Two months ago the issue of Jesus' marital status was raised again. A researcher from Harvard announced she had identified and translated a piece of papyrus with Coptic writing that suggests Jesus had a wife.When that announcement was made at a scholarly conference in Rome, University of the Pacific early Christianity Professor Caroline Schroeder just happened to be there. And she also happens to read Coptic.Schroeder will be joined by professor George Randels and Anthony Le Donne as well as Pacific chaplain Joel Lohr to discuss the Harvard announcement, the controversy surrounding the writing on the papyrus, and the opinions about speculation of a Mrs. Jesus. The discussion, titled “The Gospel of Jesus' Wife: Textuality, Sexuality, and the Latest Controversy in Religion,” will be held at 7 p.m. Dec. 5 in the Vereschagin Alumni House on Pacific's Stockton campus. The event is free and open to the public.”The announcement made international news, but also was quickly denounced by many scholars, some who claim the papyrus was a forgery, or at least not a fourth century document,” Schroeder said. “Meanwhile, other scholars have argued that the text, even if authentic, tells us nothing about Jesus himself and only about the beliefs of Christians living in the second through fourth centuries. So this should be a lively discussion.”Schroeder and Randels are professors in Pacific's Department of Religious and Classical Studies, where Le Donne is also a visiting scholar and professor this semester. Schroeder and Le Donne have penned articles and books on early Christianity while Randels has written on theological ethics. University Multifaith Chaplain Joel Lohr, who has written books and articles on the Bible and theology, will act as moderator for the panel.The controversy about Jesus' Wife started in September. Harvard professor Karen King revealed simultaneously at a scholarly conference in Rome and in interviews with the New York Times and other news outlets that she identified a new papyrus fragment containing the earliest known statement saying that Jesus was married. Since this discovery was announced, some scholars and religious leaders have denounced the so-called “Gospel of Jesus' Wife” as a likely modern forgery, with some claiming there are hints the handwriting reflected modern techniques not available when the words were penned.Schroeder said that some of the topics the panel will attempt to approach include:

The event is sponsored by Pacific's Department of Religious and Classical Studies, the Pacific Alumni Association, the Humanities Center, Women's Resource Center at Pacific, Religious and Spiritual Life at Pacific, and Phi Beta Kappa. 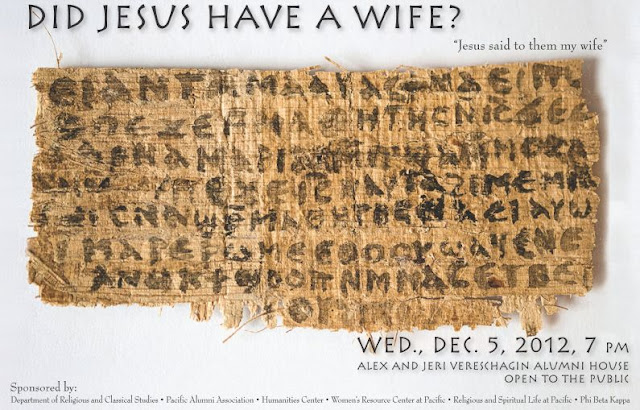 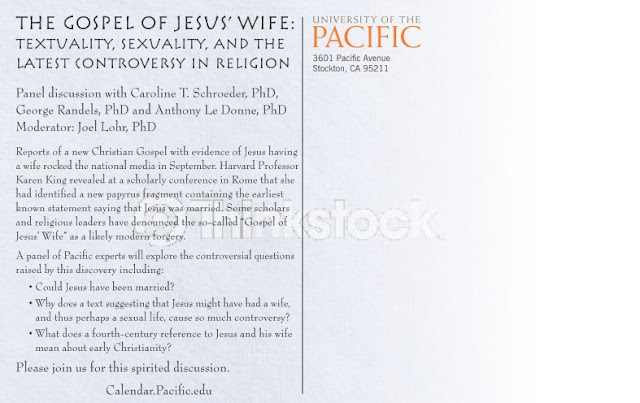