Fred Clark has a nice round-up of right wing predictions of post-election doom and gloom if Obama is elected, from what he aptly describes as a “sub-Christian” perspective.

But it is not as though the left does not have a comparable problem, even if it seems to me to be someone less severe and insane for the most part. Democracy would not vanish if Romney and Ryan were to be elected, any more than it has vanished since Obama and Biden were, or would be if they were to be re-elected.

The truth is that our society has a selection of checks and balances in place that means that no president can unilaterally change the fundamental nature of the way the nation functions. But also, however large the contingent in the United States of the gullible, of paranoid conspiracy theorists, of racists, of Communists and Nazis and whatever else, my impression is that they are a small fraction of the entire population. Their vote, added to that of others, may make a difference. But after the election is over, most people whether Republican or Democrat want to work, earn enough to make a living (and hopefully more), live a peaceful life, and not do any of the insane things that someone in the other party might caricature them as liable to do. And so it seems unlikely that any apocalyptic predictions centered around who is elected will transpire – or at least, if they do, it will probably not be because of who became president.

Yet the truth is that paranoid conspiracy theorist rhetoric is typical of our presidential campaigns, and yet under no president from either party did the world end, nor were any of the directions our country took which some of us may regret due to the influence of the president alone.

As a Christian, I believe – and have heard time and again from the pulpit – that words have an impact. I remember the analogy that a professor once used of someone throwing a brick through a window, then going inside and saying “I’m sorry, I take my brick back.” We often try to take back our words – but the harm remains done. And even when we don’t take back what we said or apologize, we often try to live as though we didn’t do the harm that we did by our words. If we continue to throw exaggerated claims back and forth on behalf of two parties which are relatively close to one another on the political spectrum, then we should not be surprised when we discover our country to be deeply divided and in very bad moral health.

Presidential elections matter. But so do honesty, kindness, and respect. How do we change the way most people, most parties, and most candidates approach elections? If enough people stop simply uncritically accepting what this or that party or candidate says, or take a hard stance on exaggerated rhetoric and misrepresentation, could we change the election culture in the United States?

Let me end on this humorous note, with the choice between candidates according to Google’s autocomplete function: 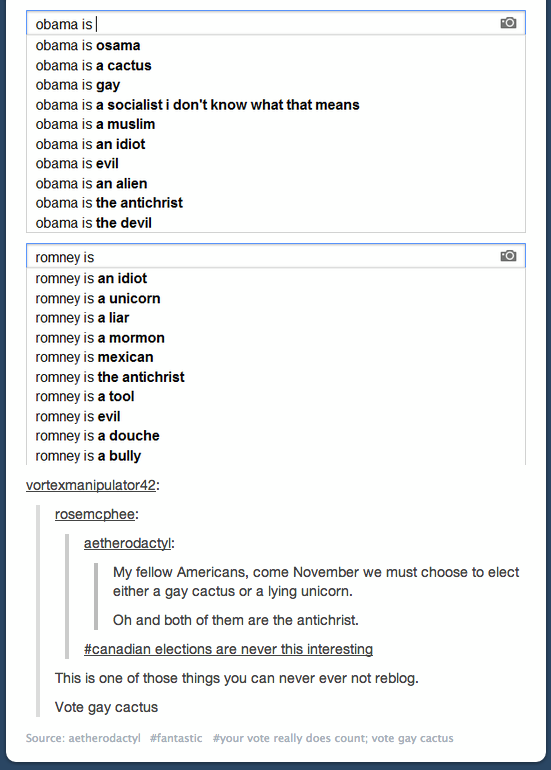 November 5, 2012
The End of the Happy Middle Ground?
Next Post