Doctor Who: The Snowmen

Tonight’s episode of Doctor Who, the long-awaited Christmas special “The Snowmen,” did a wonderful job of preserving the humor, magic, and terror that make Doctor Who more than a science fiction show. SPOILERS AHEAD!

The episode begins with a Doctor that is gloomy and withdrawn, having decided to try to avoid becoming attached to anyone as he still carries the scars of what happened to Amy and Rory. And yet the tone is not at all gloomy – on the contrary, it is light-hearted and full of humor, with the greatest amount of comic relief being delivered by Strax, a Sontaran!

Vashtra makes reference (right before the brand new and very impressive opening credits sequence) to the Doctor’s “usual impact,” adding that it always begins with the same two words, after which Clara pokes her head in and asks, “Doctor Who?”

The episode is profoundly theological, as long as we realize that, when people speak of God, they are always talking about at least the universe. For pantheists, the universe and God are coterminous. For panentheists, God is more than the sum of the parts of the universe. And if for theists the universe is distinct from God, God is still regarded as acting in and through the universe, so that the behavior of the universe is a reflection of the will of God.

And so that puts an interesting perspective on the Doctor’s statement about having spent more than a thousand years saving the universe, and having learned one thing: the universe doesn’t care. His claim is not that no one appreciates what he does, but that the universe itself does not repay his actions by affording him kindness of the sort he thinks would be an appropriate reward, including but not limited to the ongoing lives and presence of friends like Amy and Rory.

But as has happened before after a painful departure, into the Doctor’s life has walked Clara, who he will only realize is “Souffle Girl” at the very end of the episode.  Vashtra imposes a one-word test on her as a sort of vetting procedure, which seems like it may have been the Doctor’s idea. She has to come up with answers to Vashtra’s questions using only one word, and in the end, Vashtra agrees to deliver a one-word explanation of why the Doctor should help in the present dangerous situation. The word she chooses is “Pond” – in this case, reference to a pond that doesn’t thaw and which seems to be connected to the appearance of carnivorous snowmen. But the other resonances for the Doctor are obvious.

Clara asks at one point about the TARDIS “Is it magic? Is it a machine?” Of course, the answer in a very real sense does not matter. Doctor Who is as much fantasy as it is science fiction.

Ultimately the Doctor decides, in an effort to save Clara’s life after she is injured and he considers himself responsible, to try to make a bargain with the universe. The question of whether the universe makes bargains is left open-ended. But the sort of bargain envisaged is precisely the sort that human beings often try to make with God, in order to spare the lives of those we care for. 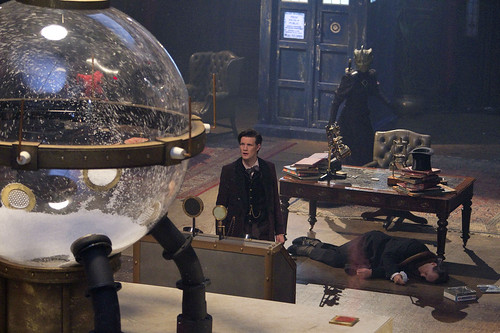 There are numerous references and allusions to Sherlock Holmes peppered throughout the episode. But more than that, there is an allusion back to the era of the Second Doctor, as the disembodied mind that is seeking to use snow and ice – and malleable human minds – to take over the world turns out to be the “Great Intelligence” which long-time viewers will remember from “The Abominable Snowmen” and “The Web of Fear.” Such a disembodied mind also has theological aspects to it – as does the indication that such an entity can be parasitic and in fact a reflection of its host rather than something with its own clear identity. The same can certainly be said about human ideas concerning God. In the episode, however, the focus is on cultural memes rather than religious ones, as the Doctor says more than once: “Carnivorous snow meets Victorian values.”

All in all, I thought that “The Snowmen” did a fantastic job of making our long wait seem worth it, and of setting the stage for the season to come. Clara Oswin Oswald seems to have the potential to be the new Rory – perhaps she will die at the end of each episode? If so, then clearly we will have a narrative arc that will last for at least a season, as has been typical of Doctor Who in recent years. And with the way the relationship has started, will his wife be jealous? Does she have a right to be – or to put it another way, can a time lord, or any time traveler for that matter, ever be a widower?

What did you think of “The Snowmen”?

December 25, 2012
The Short-Term Impact of Jesus' Birth
Next Post

December 25, 2012 Quote of the Day (The Doctor)
Recent Comments
8 Comments | Leave a Comment
Browse Our Archives
get the latest from
Religion Prof: The Blog of James F. McGrath
Sign up for our newsletter
POPULAR AT PATHEOS Progressive Christian
1