Fringe: Are Emotions Our Strength Or Our Weakness?

The episode of Fringe “The Human Kind,” which aired this past Friday, involves a lot of discussion that intersects with faith, doubt, reason, intuition, emotion, and even God and providence.

Before getting into the spoiler-containing part of the post, let me say something that I think could already be said based on previous episodes. Joshua Jackson, who plays Peter, seems to me to do a fantastic job of emulating the depiction of an observer first pioneered by Michael Cerveris with the character September.

For those interested in discussions of the episode elsewhere, see the posts by Paul Levinson, Charlie Jane Anders, Derek Gayle, Kevin Fitzpatrick, and Noel Murray.

Now, on to my own thoughts – with spoilers, so if you have not yet seen the episode yet and want to do so spoiler free, stop reading now, and come back after you’ve seen it.

This episode really gets at the metaphysical heart of the exploration of the “fringe” of science which is at the show’s core.  Granted, for it to work, one has to suspend disbelief (if one is skeptical about the various things listed in the show’s classic opening credits sequence). But within the framework of the show, the conversations between Olivia and Simone are really about the key question: Do “anomalies” at the edges of our experience and at the edges of science simply show that the universe is weird, or do they point beyond the ordinary to some sort of transcendent reality?

Here’s the key bit of dialogue between Olivia and Simone: http://www.youtube.com/watch?v=mitDJZs6ZtM

The skeptical stance Olivia adopts is illustrated in this snippet of dialogue which someone turned into a poster: 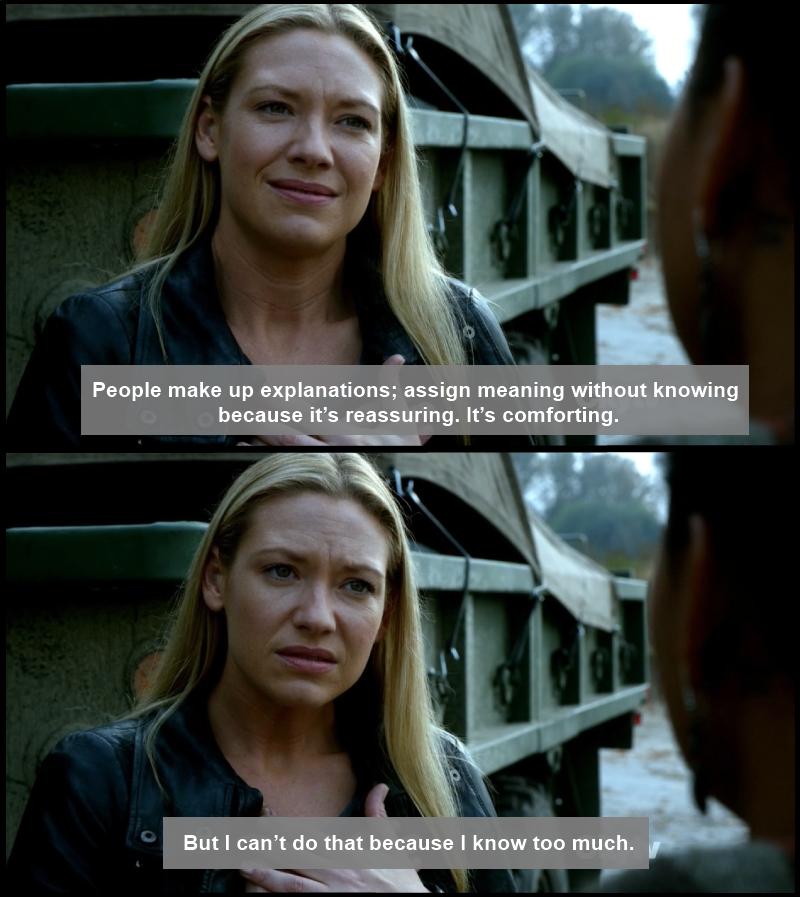 The next line after the one depicted in the image above is also an important one. Olivia adds, “It’s all just numbers. And the invaders, as you call them, are just better at math than we are.”

Towards the end of the episode, some have seen Olivia as backtracking on her skepticism. But that isn’t necessarily right. Doubt and faith need not be seen as opposites. And it may be that, if Simone’s faith needs to be tempered by caution and skepticism, she rightly offers a corrective to Olivia when she says that you can’t know everything – in other words, there is more to human life than what we can know.

When Olivia tries to win Peter back from completing his journey down the path, we see Olivia embracing the truth of this – that what we feel is a crucial part of our human existence. Were that not so, there would be no reason for Peter to turn back and stop the process that is improving and expanding the rational part of his brain at the expense of the emotional.

Peter and Olivia discuss at one point whether emotions are the weakness or the strength of humanity in its present form. I don’t think this is a question with an either/or answer. Emotions are our weakness and our strength. They lead us to lash out and do great harm, but they also add connections with others to our lives which make it rich and rewarding and meaningful.