As always, when some individual or groups pull out their guns and mow down innocent victims, as happened today in Sandy Hook Elementary School in Newtown, Connecticut, there are people who will try to profit from it.

I'm not talking here about the makers and sellers of guns, although they do indeed profit both at the front end, arming the killers, and then in the aftermath as still more people purchase guns in the vain hope that adding still more guns to the mix will make them safer.

No, I am talking about the lowlife pseudochristians who say things like this: 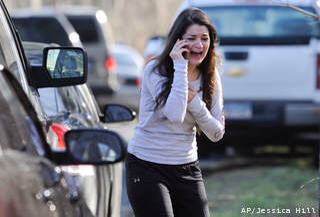 Europe is far more secularized than the United States is. Canada is a lot like us but has socialized health care. Japan is hardly a bastion of American Christian values. Yet we are the ones that continue to see bloodshed on our streets and in our schools. If there were a correlation to be made, perhaps it would be that having more fundamentalist Christians who promote pseudoscientific nonsence and dogmatic absolutism leads to a rampant self-righteous individual-against-the-world attitude which is bound at times to erupt in violence. But those who recognize that there seems to be such a correlation seem, for the most part, to have the sense to realize that when people are in shock and heartbroken is not the time for such discussions – although we desperately need to have them.

I am not sure what profit people like Eric Hovind, Bryan Fischer, and Mike Huckabee hope to gain most. Fans for their twitter account. Attendance in their churches and money in the offering plate. Votes for their party of choice. Maybe just the deflecting of blame away from their own absolutist approach to life which engenders hatred and violence – from the evil within themselves. It sickens me that anyone would use deceitful tactics in the midst of tragedy to seek their own selfish gain. I hope it sickens you too.

Let us mourn. And then let us act, not in ways that clearly have nothing to do with the matter, but in ways that might actually make a difference. Because if we can't talk in the midst of a tragedy, and don't talk after, then we are unlikely to do anything that might prevent the next one.