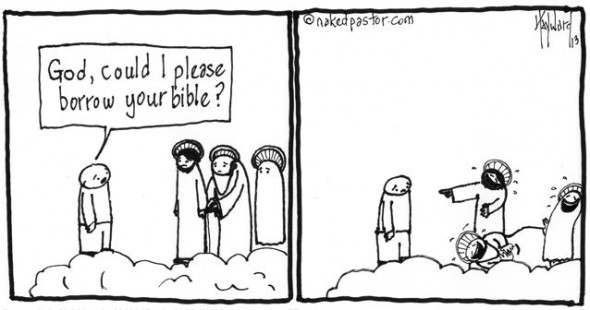 David points out that the Bible’s repeated references to “the Word of God” are not about something that can be called “the Bible.” This is true – and ought to be obvious – for several reasons. First and foremost, when the texts that eventually came to make up what we call the Bible were written, they were not yet part of a collection known as “the Bible” and so could not yet be referring to a collection that included those same writings. Second, the usage within the Bible is much broader, ranging from God’s word that creates and which confronts human beings through the prophets in the Hebrew Bible or Old Testament, to the Word as Jesus in parts of the New Testament.

This is a crucial point to grasp, whether for understanding the Bible, or avoiding bibliolatry, or understanding why it is folly to ignore evidence from anywhere other than the Bible when assembling one’s viewpoint on a given matter.

I’ll say it again, since it is a crucial point: When the texts that now make up the Bible were written, there was as yet no Bible. And so to use those texts to justify limiting the “Word of God” to the Bible is to make them mean something very different than they meant when they were written.