Via Nancy French, I learned of a bizarre online article by Liberty “University” professor Johnnie Moore, in which he claims that Jesus was a capitalist fundamentally opposed to socialism.

Why this person thinks it wise to pontificate about Jesus and the Bible without first studying them in their historical context is beyond me.

Here is the core of the piece:

First, Jesus encouraged his followers to exclusively practice voluntary, personal charity. At no point—either in Jesus’ ministry or in the ministry of the early church—were Christians forced to surrender their money so that elders might distribute it to others. On the contrary, they were encouraged (even in Acts 4:32-35) to give voluntarily, and they did so.

Secondly, in two awfully capitalistic moments, Jesus once stated outright that “a worker deserves his wages (Luke 10:7),” and delivered an entire parable praising the profitable, investment strategy of some workers while condemning the single man who didn’t make a profit as “wicked and lazy.” Jesus even says, when the servant returns with no profit, “you should have put my money on deposit with the bankers, so that when I returned I would have received it back with interest. (Matthew 25:14-27)” Jesus liked bankers.

Thirdly, Jesus didn’t see the government as the answer to society’s greatest moral and social ills. In fact, up until the very end of his life, he fought against his own disciples who were imagining a revolution that would end in Jesus being set up as an earthly king. He once said, “My kingdom is not of this world. If it were, my servants would fight… (John 18:36)”

Jesus’ first followers also had a similar view of the role of money and of government. In fact, almost immediately we find other examples of property rights, the apostles condemning people who expected to eat without working, and proclaiming that Christians should give willingly, not out of coercion.

But, in so doing, he diminished the importance of the “public sector” and emphasized the role of the “private sector.” He believed that it was the role of God’s children to take care of those who were also God’s children who were struggling through life. He taught the primacy of personal charity.

Modern research backs Jesus up on this. Studies have shown time and again that the vast expansion of government always “crowds out” personal charity (there was, for instance, a 30% decline in charitable church activity in the immediate aftermath of the New Deal), and private charities are far more efficient and effective than public programs.

So, when big-government liberals use Jesus’s name to make government our de facto God-on-earth, they are, in effect, creating systems that make it more difficult for regular people to give more help to others.

Suffice it to say, if Jesus dropped in on our 21st Century like he did in the first, chances are he wouldn’t be a card-carrying socialist. To the contrary: Jesus was, is and would be a capitalist.

First, Jesus said nothing about implementing any Christian principles in government, unless one includes the future Kingdom of God he envisaged as involving “government.” It would, after all, apparently involve apostles sitting on thrones and judging the tribes of Israel, but whether that was a one-off occurrence or an ongoing state of affairs is not specified. 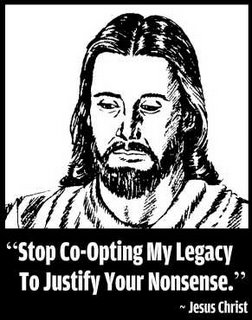 But since Jesus did not live in a democratic context, there is nothing about Christians working to see their views implemented in legislation.

And yet most conservative Christians are happy to see their views implemented when it comes to marriage, abortion, and many other topics. And so unless Moore is calling for such Christians to abandon that sort of advocacy, then his removal of economic justice from the realm of things Christians ought to work for is duplicitous and hypocritical.

The appeal to the parables of Jesus is problematic. The individuals in the parables in question were often acting in ways that were assumed to be wrong in Jesus’ time, not assumed to be appropriate upstanding capitalist behavior as in ours. Why Jesus compared God to an absentee landlord, a master who rewards those who lend money and charge interest (something that was not merely frowned upon but against Biblical law), and an unjust judge, to name a few examples, is an interesting question. But it does not seem to have been to give a stamp of approval to those sorts of individuals in the human realm.

It is important to note as well the simple fact that other readers of the Gospels get a completely opposite impression from Moore. Here’s just one example at random, from Thurman Hubbard:

Those who refuse to accept the fact that Jesus Christ was a progressive, a liberal, and a socialist are either in denial of what the Gospels say, or they are hopelessly ignorant; content to be misled by the charlatans whom their tithes support. Study the Gospels and you will have no honest choice but to conclude that Jesus Christ was a radical liberal in his deeds and ideas.

This is just some guy on the internet that I came across through Googling, who draws the conclusion from reading the Gospels (with no more sophistication or scholarly concern than Moore) that Jesus was a socialist. My point is not to simply adopt this view, but to highlight that it should be obvious that one’s assumptions influence one’s impression on this matter, and so not to assume that either is correct, but dig deeper.

The question that many ask when seeking guidance not just for their behavior as individuals, but for the policies they vote for and try to see implemented in federal or state law, is “What would Jesus do?” Why would anyone think that, even though according to Luke he demanded that his followers give up all their possessions, and give it to the poor,  and even though he healed the sick, that Jesus would be opposed to a society doing those things, and to his followers voting for those things to be done?

Would he not rather say to all those wealthy people who claim to be his followers and who claim him as a conservative and a capitalist that which Luke 14:33 records him as saying? Here it is, since many today seem to have forgotten it:

So then, none of you can be my disciple who does not give up all his own possessions.

January 16, 2013 Apparently It Needs To Be Pointed Out
Recent Comments
44 Comments | Leave a Comment
Browse Our Archives
Related posts from Religion Prof: The Blog of James F. McGrath