John the Baptist and the Gnostics

John the Baptist and the Gnostics January 1, 2013 James F. McGrath

Miguel Conner has an article in The Examiner highlighting the various mentions of and views about John the Baptist in Gnostic sources. In it, he links to one of the chapters I translated from the Mandaean Book of John! 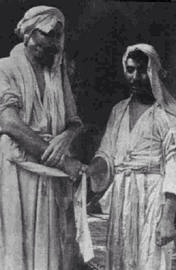 There is a need for a detailed scholarly treatment of this topic. When G. R. S. Mead wrote The Gnostic John the Baptizer (which can be read online for free, since it was published in 1924), that was before we had the Nag Hammadi texts. Working as an outsider to the relevant fields, he managed to render just a few excerpts into English.

I do not intend my reference to Mead’s status as an “outsider” to relevant linguistic and other training as a slight. Lady Drower (a volume of whose scholarly correspondence Jorunn Buckley recently published

) was also an autodidact. Yet her contribution to Mandaean studies remains unequalled. As a New Testament scholar by training myself, I too can be considered something of an outsider, or at least a latecomer. Mandaean studies has throughout its history been the purview of those willing to plunge into a challenging language and subject matter, whoever they happened to be. They were often simply people who realized just how important and interesting these texts are, and did what they could with them.

I will say again something I say more and more often of late. If the Mandaean sources were discovered for the first time today, they would make international headlines. First there would be an attempt to decipher their unique alphabet. Then it would be realized that they are in a dialect of Aramaic. Then it would come to light that they mention John the Baptist and Jesus and other familiar figures from the New Testament, but in very different ways. There would be incredible excitement, and lots of scholarly attention. The relative scholarly neglect of Mandaean sources is thus baffling.

I’m working primarily on one Mandaean source at present, the Mandaean Book of John. But there is also a need for a broad academic study of John the Baptist from the perspective of Gnostics, and in some sources, as himself a Gnostic. One that covers the ground in Conner’s article, but with the detail of a scholarly monograph. Perhaps one day I will write it, but if others get there first, that is fine. It is one of the refreshing things about Mandaean studies that it is not a field in which one has to worry about others getting to a subject before you do. It is rather one in which we hope that someone, somewhere, will actually work on any of the dozens if not hundreds of important questions that are deserving of scholarly attention, and which have yet to be the focus of anyone’s research.

Thanks to Jim Davila for directing attention to the article. I hope it helps to generate not only public but also scholarly interest in these matters.

January 1, 2013 Seeking a Friend for the End of the World
Recent Comments
3 Comments | Leave a Comment
"Under the old covenant (ten commandments), people were (and still are) racists and sexists. For ..."
Herrnhut Was Jesus a Racist?
"Reconciliation is a two-way street, restoring a broken relationship between two people. God does indeed ..."
Iain Lovejoy Forgive Us Our Debts, Not Repay ..."
"Excellent. God is not, and does not want to be, an accountant; keeping a ledger ..."
Harvey James Johnson Forgive Us Our Debts, Not Repay ..."
"Don't confuse forgiveness with reconciliation. Jesus tells us to forgive people who sin against us, ..."
Derek Thompson Forgive Us Our Debts, Not Repay ..."
Browse Our Archives
get the latest updates from
Religion Prof: The Blog of James F. McGrath
and the Patheos
Progressive Christian
Channel
POPULAR AT PATHEOS Progressive Christian
1