Seeking a Friend for the End of the World

Seeking a Friend for the End of the World January 1, 2013 James F. McGrath

. It is a great movie to start the year with. It has Steve Carrell in the lead role, and is billed as a comedy. It does have amusing moments. But I would not classify it as a comedy. It is about the meaning of life, and is profoundly serious and moving.

The movie focuses on two people who live in the same apartment building, but have never met. And an asteroid is approaching Earth and will destroy it, and the last attempt to do something to stop it has failed.

That's all revealed early on, so those aren't spoilers. And I will not include anything that could be considered spoilers in the rest of this post, either. I want to focus on major themes, not plot details.

The guy who doesn't want to do that stuff seems like an oddball, and he himself thinks that he does not know what he wants. But he at least knows what doesn't satisfy and isn't worth spending his final days on (although he is arguably mistaken about one of them, in a sense).

Realizing the end is near makes you realize what is important to you. But that doesn't mean that what you prioritize is actually worthwhile.

What makes life valuable is the connections that we make with other people. And even if you only have a matter of weeks, it is possible to do that.

And the things that make life worthwhile, like just lying next to the person you love and talking with them, are worth doing even if they are the last moments of our existence.

I've held the view in the past, and thus understand it, that life has to go on forever in order to be meaningful. It is a common view among religious people.

I no longer hold that view. (And as my Sunday school class transitions from discussing the Book of Revelation to exploring concepts of afterlife and eternal life, I look forward to pondering this subject in conversation with others who are bound to view things differently than I do.)

I am now convinced that ephemeral things are beautiful. Moments that we spent and will never recapture can be beautiful.

My hope is that somehow such things will be remembered. That will add to their preciousness. That seems to me an appropriate form for religious hope to take. For my ego to continue ad infinitum, on the other hand, would not in and of itself seem to add anything to the value of past moments, one way or the other. As I said in a post last year,

If you have not found anything worth living for, anything valuable and precious in the life you now live, then to imagine that somehow another life will resolve all the problems and answer all the questions seems misguided. If you cannot here and now find things that are worth living for, then what would you live forever for?… If there is an afterlife, surely it will not involve regretting having found meaning and joy in existence. But it might well involve regret at having failed to do so.

This movie is beautiful and profoundly spiritual. It features snippets of superficial God-talk that are inevitable when characters are faced with the end of the world. But that isn't where its intersection with religion is really to be found. It is in its core, in its essence, about the meaning of life.

The movie's story, ultimately, is a symbol of the fact that we all have limited time. Rarely do we have a clear sense of how long our lives may last, but we do know that death is inevitable. And the truth that we so often avoid is this: If we would not continue doing the things we are doing now if we knew the end was near, then they are not the things we ought to be focusing our lives on now.

The things that are truly worthwhile are worth spending your last moment alive on.

David Hayward posted a cartoon today about how to approach 2013. I'll include the cartoon at the end of the post below. But he also put its point memorably. We often say that there is “no time like the present.” But the truth is that, at least as most of us view time, there is no time but the present.

. Use it as an opportunity to reflect on what you would do if you knew that, unlike silly things like yet another claim about a rapture or Mayan apocalypse, the world – or your world – was really going to end by a certain day and time. And then find a way of prioritizing those things that would be worth doing, even in the midst of the life we live without knowing precisely how long we may or may not have. 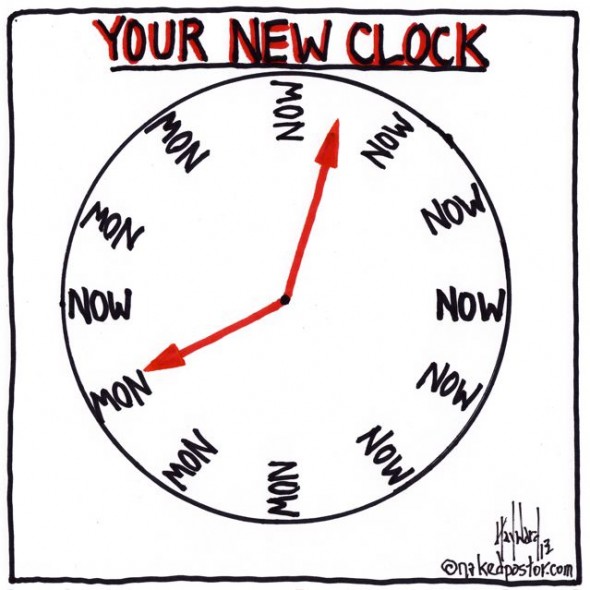 January 1, 2013
John the Baptist and the Gnostics
Next Post

January 2, 2013 Announcing TalkHistoricity: An Index of Mythicist Claims
Recent Comments
5 Comments | Leave a Comment
"Sorry I didn't say congratulations right away!"
James F. McGrath Forgive Us Our Debts, Not Repay ..."
"I don't really have to. Hypocrites vigorously resist being shown to be wrong, and most ..."
Kyllein MacKellerann " QAnon Conspirituality and QAmerican Culture
"I'm not sure you'll convince anyone with that approach..."
Harold Porter QAnon Conspirituality and QAmerican Culture
"Support and responses:1> There is no means of currently making or injecting a microchip that ..."
Kyllein MacKellerann " QAnon Conspirituality and QAmerican Culture
Browse Our Archives
get the latest updates from
Religion Prof: The Blog of James F. McGrath
and the Patheos
Progressive Christian
Channel
POPULAR AT PATHEOS Progressive Christian
1