The “But Keith and Le Donne are Christians” Argument Against Mythicism

The “But Keith and Le Donne are Christians” Argument Against Mythicism January 24, 2013 James F. McGrath

Mythicists can try one’s patience, but if you hang in there, they will consistently reward your patience with laugh-out-loud comedy.

An example from today: 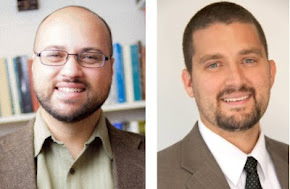 Commenter BretonGarcia posted several comments on a recent post of mine, asserting that Christians are so biased that their results and even their views about methods are untrustworthy.

Instead, he suggested, one should accept the criticisms of classic methods like the criteria of authenticity, which have been offered by scholars such as Chris Keith and Anthony Le Donne.

I responded in a comment asking BG why Keith and Le Donne are considered by him to be trustworthy, when they are both Christians.

BG asked how I am so sure they are Christians (sorry Anthony and Chris, this guy obviously doesn’t read your blog, to say nothing of your books and other publications!)

He tried to suggest that Chris is an agnostic and Anthony is Jewish. 🙂

I know both of these scholars, and consider them friends. I will let them speak for themselves on this one, if they care to add more. But their credentials as Christians are no more in doubt than their credentials as stellar scholars. And it is only bias that insists that, if someone is an excellent scholar, then they must not be Christians.

And so I simply had to highlight this further example (they never seem to stop coming!) of how mythicists claim to be about countering bias, with rhetoric that might sound plausible and even well-intentioned if one doesn’t look too closely at what is being said and done. Yet when one does look closely, it seems that few mythicists stop to notice how their own biases might be leading them astray, or to ask how many of the scholars they quote mine to try to bolster their claims actually share the biases they claim undermine scholarship and make the the conclusions of Christian scholars by definition unreliable.

To be honest, I have sometimes suspected that the appeal of more postmodern approaches to the historical Jesus for some Christian scholars (and some Christians more generally) is precisely the way it allows one to circumvent the negative judgment pronounced on so much material on the basis  of criteria and the attempt to be as scientific as possible, in the tradition of positivism.

That anyone could think that the majority of Christians are huge fans of the classic methods and results of historical Jesus research just indicates what most of us already knew: mythicists are not as acquainted with the history of scholarship in this field as a student of the subject is expected to be. And those who think that they can dismiss a field of which they do not even have a student’s knowledge are referred to as cranks.

January 24, 2013
The Plot of Star Wars Episode VII is Now Known
Next Post

January 24, 2013 More on What J. J. Abrams' Star Wars Movie Might Look Like
Recent Comments
24 Comments | Leave a Comment
Browse Our Archives
get the latest updates from
Religion Prof: The Blog of James F. McGrath
and the Patheos
Progressive Christian
Channel
POPULAR AT PATHEOS Progressive Christian
1