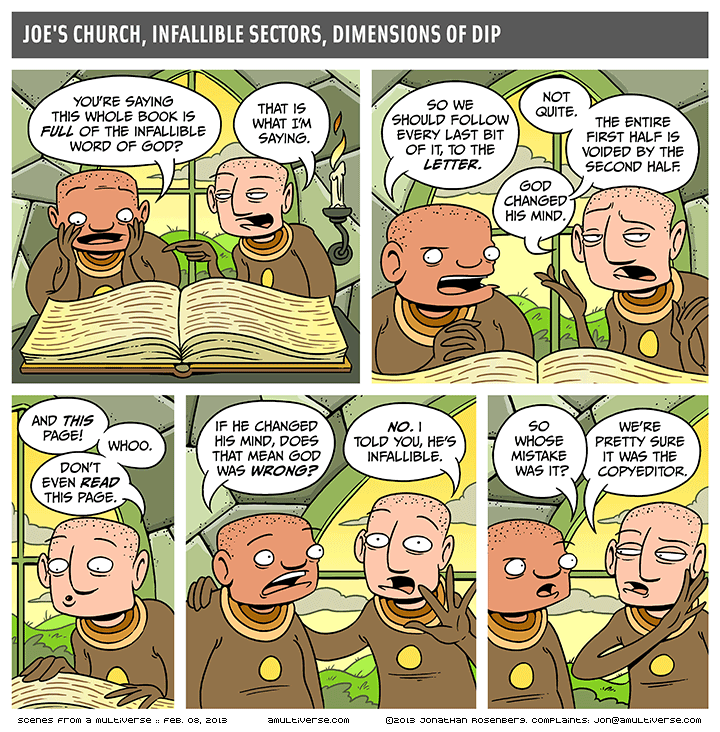 From Scenes from a Multiverse. The view of how Christians view the Old Testament is at best a caricature. But the cartoon does nicely poke fun at those who would speak of the inerrancy of “original autographs” that we no longer have, simply to be able to assert that the Bible was once inerrant (and so now is still a close approximate to that inerrant original). This has long struck me as a rather odd last-ditch attempt to salvage the notion of Biblical inerrancy, a move made when the evidence that the Bible we now have is not inerrant piles up too high. But it is made at the expense of the authority of the Bible we now have, the evidence for the errancy of which, found in the Bible’s own pages, ought to carry some weight with Christians who claim to accept Biblical authority. But at that point, they show what their true authority is: a doctrine of Scripture, and the doctrinal system it is part of, rather than Scripture itself.

February 8, 2013 Interesting License Plate
Recent Comments
1 Comment | Leave a Comment
"Glad you found your way here!"
James F. McGrath Donald Trump vs. the Kobayashi Maru
"The devil is a funny funny topic!"
davidt Fox News is Full of Sith
"If 'there are' 'in fact' two 'coexisting' 'universes', then whatever is trapped in one of ..."
tell me when it's over Is It Reasonable To Believe In ..."
"Just discovered this blog through a reference on a Youtube channel I follow. And what ..."
Dan McCollum Donald Trump vs. the Kobayashi Maru
Browse Our Archives
get the latest from
Religion Prof: The Blog of James F. McGrath
Sign up for our newsletter
POPULAR AT PATHEOS Progressive Christian
1