In my class on the Bible on Friday, we discussed the Book of Ruth. And as it happened, I discovered that it was possible to encapsulate the three main topics/themes that I wanted to make sure got attention under three headings with alliteration.

One topic (the first “r”) was romance. My students were fairly sure that there isn’t really any in the book – certainly not in the sense that we find it in the Song of Songs. As I looked for images to go with this post, this one made me laugh out loud: 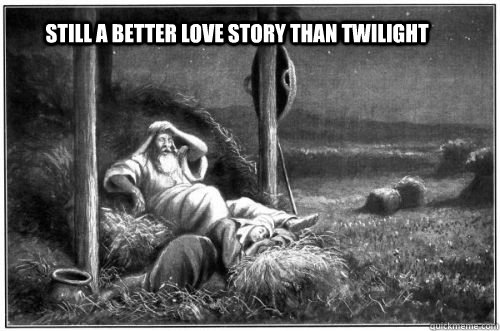 A textbook I used to use spoke of “romance” in the book, while the one I currently use is clear that modern romance simply isn’t there, but something that modern readers in certain cultural contexts tend to read into the text.

The second “r” is racism. We looked at the contrast between the law in Deuteronomy 23:3, prohibiting a Moabite from entering the congregation of Yahweh, and the Book of Ruth, which says that king David was descended from this Moabite woman. You simply cannot accept both as valid. Either king David was illegal, or the law is wrong. And so this illustrates well the same sorts of issues that came up in discussions of slavery in the United States (a topic we focused on in an earlier class, and which Rachel Held Evans discussed recently on her blog), and which continue to come up today. Those who claim the Bible is inerrant and contains no contradictions are liars who are simply trying to deceive people into thinking that (1) the views for which they cherry-pick support from the Bible are not their own, but God’s, and (2) no one who disagrees with them is a Christian who respects the Biblical authority. It is time to blow the lid on that scam, because people continue to fall for it!

Making “redistribution” the third “r” was deliberately provocative. I’ve talked about this subject before on the blog, and so will not repeat all the points here – those who want to can click through to read my earlier post. The law in Leviticus 19 requiring people to leave the edges/corners of their fields ungleaned so that others could come and help themselves is an interesting one, which cannot be transferred to the present day and expected to resolve issues of poverty. Indeed, one of the things that came up was the fact that this seems like a band aid on a persistent problem rather than an actual solution to the problem of poverty. Economics and social justice are another area in which the Bible says many different sorts of things, a multitude of which are ignored by some who claim to be concerned with Biblical teaching and Biblical authority.

Finally, just for the benefit of those who may be wondering, yes, I did show the class this image: 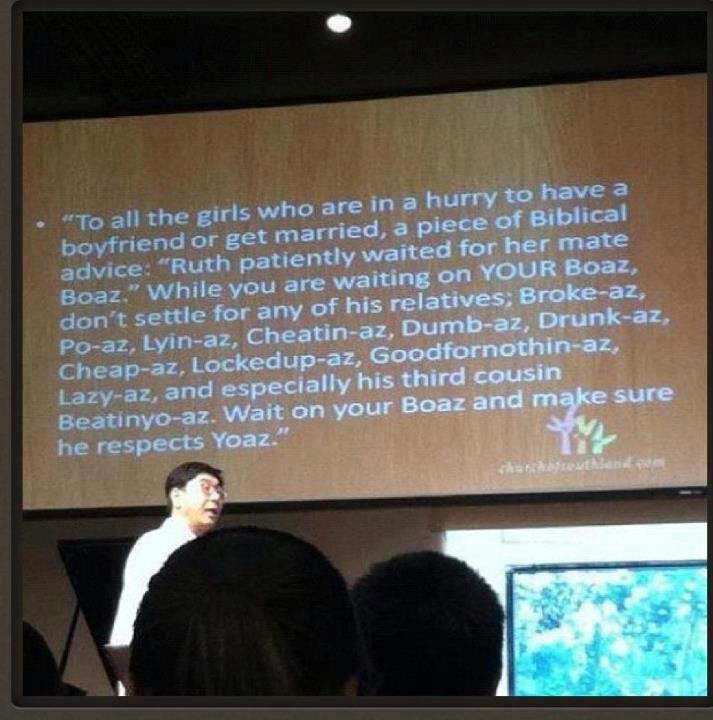