There is an interesting book by Bellarmino Bagatti, Ancient Christian Villages of Galilee

(a translation from the Italian original), which I had the chance to consult recently. Much of it focuses on Christian presence in later times, but in a few instances it is able to trace evidence back to a very early period.

Bagatti focuses particular attention on small communities with two synagogues, which suggests to him that there were groups that eventually refused to worship together. Sometimes this evidence from archaeology correlates with later evidence for the presence of Jewish Christians in that town.

I was particularly interested in the suggestion that a particular tomb in Sakhnin might be that of “min Jacob,” a Jewish Christian mentioned in Rabbinic sources. The tomb later became identified with a rabbi of a different name (Joshua), but there is a tradition associating it with that famous Jewish-Christian “heretic” Jacob of Sakhnin. It remains a sacred site shared by Jews, Christians, and Muslims. I visited the tomb on my first trip to Israel. 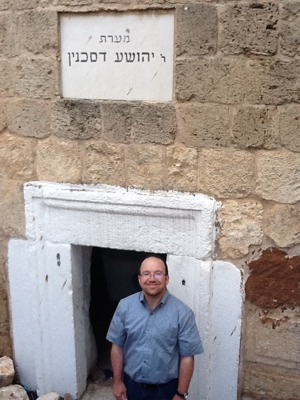