Jim West has posted some of his views on homosexuality from time to time, including posts which are so ridiculously illogical as to be bizarre. 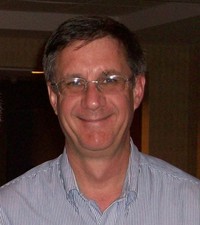 But when he says that someone who disagrees with him isn’t a Christian, he’s gone too far.

The irony is that Jim embraces the work of historical minimalists with respect to ancient Israel – people whose historical conclusions lead them to dismiss the factuality of much of the material that conservative Christians assume to be historical.

It is completely inconsistent for him to then say that someone  is not a Christian because they – on the basis of Biblical principles of inclusiveness, fidelity, and love – accept gays and lesbians as human beings made in the image of God and as in no way inferior to heterosexuals.

Jim West’s own stance on many matters reflects the acknowledgment that our thinking cannot and should not simply mirror what Christians have thought in the past.

April 8, 2013 Guest Speaker(s) Sought
Recent Comments
47 Comments | Leave a Comment
"Wasn't even aware of it."
James F. McGrath Revisiting Mythicism
"Did you get a chance to read Carrier's recent rant against you? See https://www.richardcarrier...."
John MacDonald Revisiting Mythicism
"Would literalist Christians reject the contents of Q knowing that they originate with John the ..."
Barros Serrano James McGrath at AAR/SBL in Denver
"These sound awesome!"
John MacDonald James McGrath at AAR/SBL in Denver
Browse Our Archives
Related posts from Religion Prof: The Blog of James F. McGrath

Advent: The Path of Those Who are Awake
In those days John the Baptist appeared in the wilderness of Judea,...
view all Progressive Christian blogs
What Are Your Thoughts?leave a comment
Copyright 2008-2021, Patheos. All rights reserved.
Close Ad