A Whirlwind of Inconsistencies

A Whirlwind of Inconsistencies May 22, 2013 James F. McGrath

In the wake of the devastating tornado in Oklahoma, a number of people have drawn attention to John Piper’s tweet of Job 1:19.

Far from this verse indicating the notion that God is judging Oklahoma (which is what some have come to expect to hear from spokespeople for conservative Christian viewpoints), in context the verse is part of a book that depicts disasters as coming upon Job not because he in any way deserves punishment, and for reasons which he never learns.

But that doesn’t get at the heart of the issue, which is what religious believers ought to think about natural disasters (even that term suggests one particular way of thinking about them). David Hayward offered the cartoon below, indicating (again, in accordance with the message of the Book of Job) that human attempts to offer explanation for tragedy are simply more tragedies. 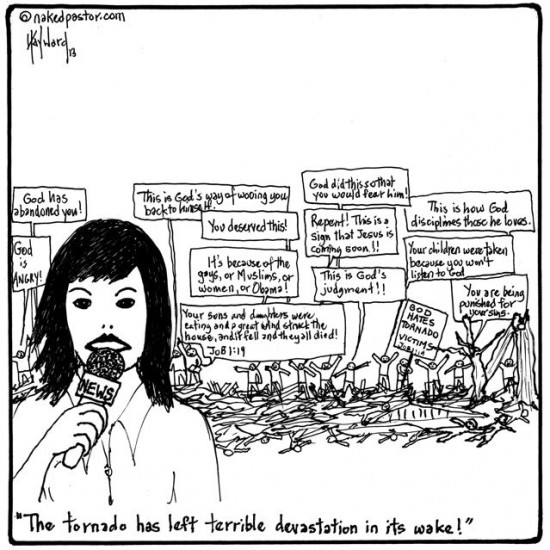 Lots of people have also seen and commented on the video of an atheist who was asked if they thank the Lord for surviving the tornado.

So be consistent. Many people reject the attempt to blame people or God for tragedy. But by thanking God for those who survive, you are doing the exact same thing. And so if you think that saying God wanted to kill young children and chose to do so with a tornado is abhorrent blasphemy, then don’t say “thank God for sparing those other people.” It amounts to the same thing.

May 23, 2013 "Christ and the Pentateuch": JSTOR Content on the Internet Archive
Recent Comments
22 Comments | Leave a Comment
Browse Our Archives
get the latest from
Religion Prof: The Blog of James F. McGrath
Sign up for our newsletter
POPULAR AT PATHEOS Progressive Christian
1