There is material in Hebrews 4-5 that is particularly striking when considered in relation to some of the classic creedal formulations of Christian orthodoxy, as well as other popular ways of Christian thinking about Jesus. We reached this section Sunday in my Sunday school class, and I wanted to share some thoughts on the passage.

To say that Jesus was tempted in every way that other human beings are seems incompatible with the view that Jesus was an omniscient divine entity. Can one know all the possible negative impacts of one’s actions and still be tempted in the same way we are, when we can deceive ourselves and persuade ourselves that no harm will come of it if we give in to temptation?

To say that Jesus learned obedience likewise seems incompatible with the view that he was one who always inevitably does what is right, which many theists define as part and parcel of the nature of God. Indeed, we might ask whether obedience can be learned in the absence of struggling.

The New Testament Gospels provide evidence (particularly in the story about the Garden of Gethsemane) that Jesus did indeed struggle in this way. And so if a Christian wants to maintain the claim of Hebrews that Jesus was without sin, then struggling with what to do is not sin.

Ironically, because of some of the material attributed to Jesus in Matthew’s Gospel, emphasizing that the root of evil action is in evil attitudes, some Christians have cultivated an approach to our inner life that is not about deliberately choosing the good over the evil, but trying to repress any thought about any alternative, as though even thinking about it were a sin.

And so instead of mature righteousness and character, much conservative Christianity is characterized instead by neuroses.

Returning to Hebrews, whatever the Christology one comes up with in relation to this epistle, it seems to definitively invalidate the sort of fundamentalist approach to the world which suggests that everything is black and white, the view that obedience is not something that involves learning and struggling, but simply doing what one is told.

As for the Christological question, it may be that the author of Hebrews, like the creators of the Chalcedonian Creed, was happy to say two apparently contradictory things. But that does not mean that we should be content to do so. Leaving room for mystery can be appropriate, but appealing too quickly to mystery can simply be an excuse for shoddy thinking. In this case, there are other ways to give expression to the conviction that the divine has been encountered in the human life of Jesus, without viewing him as a supernatural entity in a manner that makes it hard if not impossible to say that he is like us in every way and faced the same temptations we do.

Those interested in exploring this further will find there is much discussion in commentaries and other works of scholarship about whether the pre-existence language used in Hebrews denotes a real, personal pre-existence, or something more Platonic and ideal. Understanding that language as about the significance of Jesus, rather than some ontological status that he (or a being that became him) once had, seems to resolve a number of problems that otherwise seem intractable.  But not everyone agrees on that point, of course – feel free to discuss the Christology of the Letter to the Hebrews in the comments section if you are so inclined!

Finally, on a lighter note, I came across this cartoon about learning obedience… 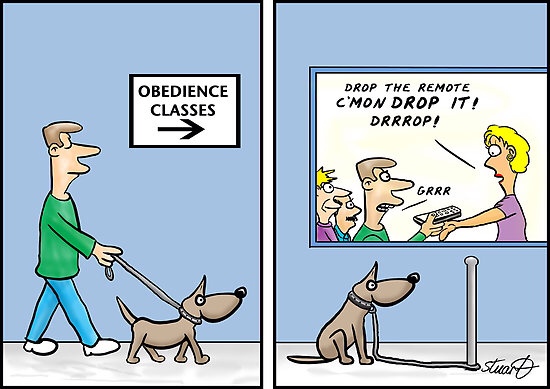