The Doctor Who Can Be Named

Over on the blog A God-Sized Puzzle, Eruesso brought Doctor Who and the Tao Te Ching together and came up with this: 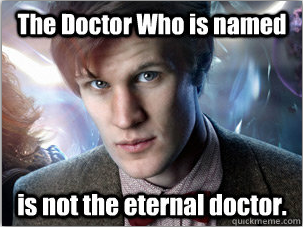 This can lead to some interesting discussions at the intersection of religion and science fiction. Human beings hunger revelations, but they fail to satisfy in the long term. You can see this in religions – no matter how much something from an earlier period is regarded as the decisive revelation, people always add to it, even if they claim it is just interpreting what went before. And you can see this in science fiction – fans long wanted to know who the Doctor was, and eventually learning of his earlier story, it just meant that, to keep the story interesting, further mystery had to be added, creating new hunger.

Yet many fans don’t want a revelation. They recognize that revelations can diminish rather than enhance. They don’t want to know the Doctor’s name.

And within the realm of religion the same is true. All the major religious traditions have mystical strands which emphasize that what is unknown is much more than what is known, and what we think we know is merely a symbol pointing to a reality that is beyond our grasp. When we think we have labels and revelations that allow us to name the transcendent, we are in fact substituting a reduced concept for the reality.

The Tao that can be named is not the eternal Tao.

The God that can be named is not the eternal God.

The Doctor Who can be named…well, you get the idea. And of course, I had to capitalize “Who” there.