Was Jesus a Seditionist?

A recent article by Fernando Bermejo-Rubio in The Bible and Interpretation raised the question of whether Jesus was a “seditionist” – which he defines as “The hypothesis that Jesus of Nazareth and his followers were in fundamental sympathy with the principles of the members of the anti-Roman resistance groups, the use of violence not excepted on principle.”

This is a great example to look at in relation to my recent discussion about the historical Jesus, scholarly innovation, consensus, and of course the possibility that it is all futile.

Bermejo-Rubio does a good job of noting some details that readers of the Gospels have often found uncomfortable, some of which also suffer from scholarly neglect. For instance, I’ve often wondered whether Jesus’ story might have unfolded differently, had one of his disciples not sliced off an ear.

But there are other things which do not sit well with the proposal.

This helpfully illustrates why there are so many different depictions of Jesus. If you exclude certain evidence, then what remains can be understood in ways that the excluded material might make impossible. And historians do need to exclude some material, as more likely fabricated or at least significantly reinterpreted later.

But in this case, it seems as though too much needs to be excluded. Love of enemies. Turning the other cheek. Foreigners coming from the East and West to take their places at the messianic banquet.

This topic provides a nice illustration of a point I have made before. Historians need to discuss “Was Jesus a seditionist?” and “Did Jesus exist?” and “Was Jesus married?” and any other possible question, including ones that tend to be relegated to the fringe.

But discussing them, and even exploring possible alternative answers, does not automatically mean that those answers should be adopted.

In this case, I think that too much evidence that is likely to reflect the gist of Jesus, if not his actual words, has to be excluded in order to make it seem plausible that Jesus was a seditionist of this sort. That he may have expected that God would intervene in history and bring all merely human kingdoms to an end is a different sort of outlook than Bermejo-Rubio is talking about. But did he envisage his followers taking up arms to bring that new state of affairs about? I don’t think so.

But I am open to reconsidering this, as one ought to be when it comes to any historical question. And so if you are inclined to disagree, please do so in the comment section!

For me, a more significant historical question is whether Jesus thought of non-retaliation as something to be adopted on principle, or merely as a postponing of violence into an apocalyptic future. What do readers of this blog think? 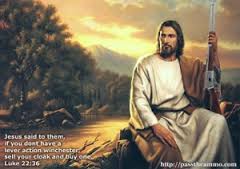 May 8, 2013 Romans in Three Hours
Recent Comments
16 Comments | Leave a Comment
Browse Our Archives
get the latest from
Religion Prof: The Blog of James F. McGrath
Sign up for our newsletter
POPULAR AT PATHEOS Progressive Christian
1