New Game: What Does The Bible Explicitly State?

Joel Watts has come up with a clever idea for a Bible-related game. It was sparked by the latest instance of someone claiming “the Bible explicitly states” about an issue they consider important. (If you Google the phrase, you get some 8.5 million results, so it is fairly common).

And so here is what Joel proposed in response:

So, let’s play a game. Explicit means “fully revealed or expressed without vagueness.”

What does the bible explicitly state? Now… the rules are simple:

So, what does the bible explicitly state?

Care to play the game? Then why not do so, whether here, or on Joel’s blog? 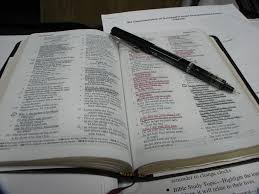 June 4, 2013 Korngold - Sinfonietta
Recent Comments
7 Comments | Leave a Comment
Browse Our Archives
get the latest from
Religion Prof: The Blog of James F. McGrath
Sign up for our newsletter
POPULAR AT PATHEOS Progressive Christian
1