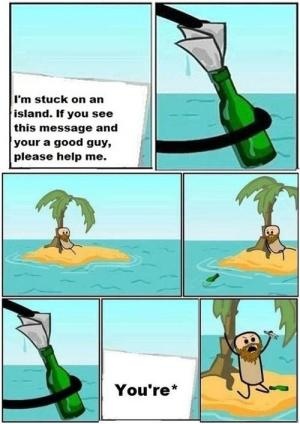 This cartoon reached me via Jim West. It made me laugh, but also caused me to ponder the tendency many of us have to judge those who do not articulate themselves in as polished or grammatically correct a fashion as one might ideally hope.

We don't know how much Jesus had learned of reading and writing. There is a depiction of him reading in the synagogue in Luke, but the story is of doubtful historicity. But Jesus was clearly creative and eloquent by the standards of an oral culture, engaging in word play and creative storytelling.

Who knows? Perhaps one day in the future, texts from our time will seem odd because of these things called apostrophes that were in use back in the 21st century and earlier, but were later judged unnecessarily complicated.

Just something to think about. Your welcome. 🙂

June 5, 2013
Paul vs. His Modern Inerrantist Interpreters
Next Post