On Facebook, in response to my post about the “Galileo Gambit,” Dudley Chapman recalled a saying to the effect that they laughed at Galileo and they laughed at Thomas Edison, but they also laughed at Bozo the Clown. I’ve found that quote in several places around the internet. Dudley added “The job of science is to figure out who is Edison and who is Bozo.” That may or may not be his own addition, but it makes a good point. Being laughed at can mean that you are ahead of your time or that you are ridiculous. Telling the two apart often takes hindsight, and so in the mean time, assuming that you are a genius rather than a clown is at best premature. The difference is that time proves some right. If you are right, then work on proving it.

On a related note, Jeremy Smith shared this image from a video, making a similar point: divergent thinking is not in and of itself the same thing as creativity. 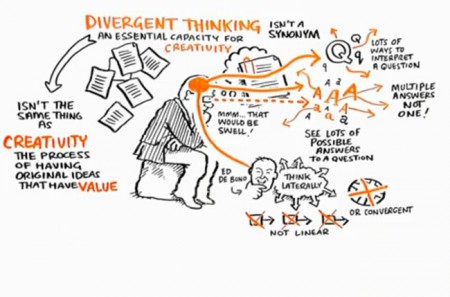 July 28, 2013 Ancient Greek Hipster Religion
Recent Comments
3 Comments | Leave a Comment
"I doubt there are any specific requirements to attend."
James F. McGrath Bratislava Conference 2022 – Receptions of ..."
"Are non-academics allowed to attend this online conference?"
LivingEND Bratislava Conference 2022 – Receptions of ..."
"It doesn't translate words. There is a long history of finding significance in individual letters, ..."
James F. McGrath The “Original Aramaic Lord’s Prayer” is ..."
"You can see that in the spirit of what he is doing."
bflaherty The “Original Aramaic Lord’s Prayer” is ..."
Browse Our Archives
Related posts from Religion Prof: The Blog of James F. McGrath