Open Parachute has a great post about the Galileo gambit or Galileo fallacy, the notion that having one's ideas opposed somehow demonstrates that they are correct.

Here is a takeaway quote:

The real lesson from Galileo is not to oppose the “establishment” or current scientific consensus – but to rely on evidence. It was this argument of his, which today most of us accept and see as almost self-evident, that describes Galileo’s real contribution to the progress of science.His argument for the heliocentric solar system, and against a geocentric solar system, was really an argument of evidence against dogma, prevailing philosophy and the Church’s use of scripture.

And here is another:

Of course, none of what I have said means that new ideas in science are never in the minority. obviously they often are – and must be fought for. But new ideas don’t win credibility by using the Galileo gambit, by arguing that just because they oppose the scientific consensus they must be right. They win credibility because their proponents gather the evidence that supports them, and evidence which conflicts with the prevailing ideas.A minority viewpoint can and does win credibility because its proponents provide evidential support. The Galileo gambit is for losers.

Click through to read more. The point relates directly to recent discussions of science standards in Kentucky, but also to how even Christians who accept that the Bible is not a science textbook can respond dismissively to science. See also Tyler Francke's blog post about the propaganda film Dispelled, the removal of the Loch Ness Monster from one anti-science “educational” resource, and Ray Comfort's continued effort to make Christianity look foolish, this time by saying that there is more evidence for God than for the sun. For some of the evidence for evolution, take a look at Dennis Vennema's series on the genome as ancient text – and see also another BioLogos article on why sometimes we need to deal with other issues before a presentation of evidence will persuade someone. And finally, see Formerly Fundie on real vs. fake persecution claims. 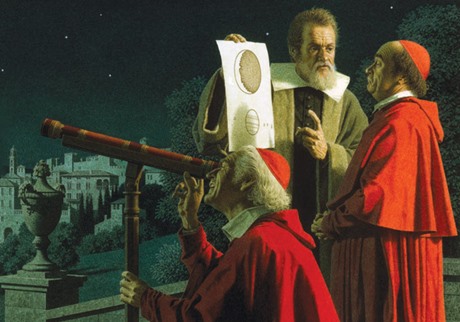 July 27, 2013 Gospels and Other Ancient Texts in the Blogosphere
Recent Comments
41 Comments | Leave a Comment
"Who was doing that?!"
James F. McGrath Fundamentalist Church History Chart
"Don't force people read KJV only! Thank you!"
Thomas Dickensheets Fundamentalist Church History Chart
"Hi James: I had already dealt with this theory when it was presented some time ..."
BenW3 Mary Magdalene (and other biblical towers)
"(2/2) Or, maybe Mary was just really tall lol"
John MacDonald Mary Magdalene (and other biblical towers)
Browse Our Archives
Related posts from Religion Prof: The Blog of James F. McGrath