Interest in the Bible

Fred Clark recently noted how odd it is that some will make an issue that is of at most tangential interest (pun intended) to the Biblical authors a litmus test of religious identity, but ignore things that are emphasized repeatedly. One obvious example is the Bible's prohibition against charging interest (at least when lending to others who are also part of God's people). It says this clearly, on numerous occasions. Here's Exodus 22:25:

If you lend money to one of my people among you who is needy, do not treat it like a business deal; charge no interest.

He eats at the mountain shrines.

He defiles his neighbor’s wife. 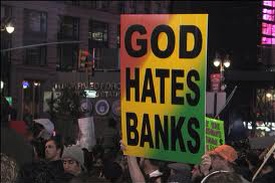 He oppresses the poor and needy.

He does not return what he took in pledge.

He looks to the idols.

He does detestable things.

He lends at interest and takes a profit.

Will such a man live? He will not! Because he has done all these detestable things, he is to be put to death; his blood will be on his own head.

Lest I be misunderstood, let me make my point clear. It is not that I think people really ought to be doing everything the Bible says (“even the stuff that contradicts the other stuff,” as Ned Flanders once put it). It is that people who are not consistently following the Bible's teachings should not be pretending that they are.