Lee Harmon on the Two Witnesses

James Bradford Pate has been blogging about a book by Lee Harmon on the Book of Revelation.

One of the most interesting things I noticed is Harmon’s suggestion that the two witnesses in Revelation 11 could be the priests Jesus and Ananus, both of whom are killed, in close connection to which (according to Josephus) an earthquake occurs.

It is always interesting to try to find historical references that an ancient apocalyptic author had in mind. And it is certainly not inappropriate to make the attempt. But as James notes, the stance of these two individuals scarcely fits Harmon’s suggestion that John of Gischala wrote the Book of Revelation, and Ananus’ execution of James the brother of Jesus makes him an unlikely candidate to be considered a true prophet by the Christian author of the Book of Revelation. Of course, one could suggest (following George Beasley-Murray) that the book we now have is a Christian redaction of an earlier Jewish work, which had such features. But if so, then that means the final Christian author didn’t understand at least some of what its earlier author(s) intended.

And so I mention this proposal as an example of how easily (relatively speaking) one can construct a theory based on some evidence, if one is willing to overlook the larger number of places where the evidence does not fit.

In conclusion, let me mention that speculation about the identity of the two witnesses is a longstanding pastime in some Christian circles. Here’s what some futurist interpreters think they’ll look like: 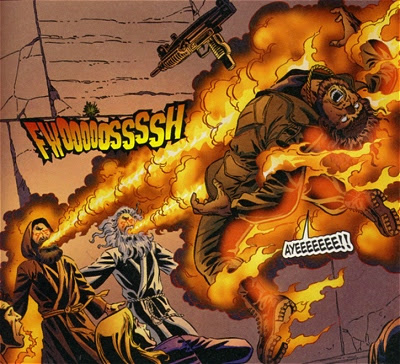 July 6, 2013
The Sequel to the Good Samaritan
Next Post

July 6, 2013 Logan Airport
Recent Comments
5 Comments | Leave a Comment
"Thank you for your thoughtful engagement with the book. I hope you continue to find ..."
James F. McGrath ChristianBooks Q&A: What Jesus Learned from ..."
"I have read the Introduction and first chapter. Your book intrigues me. I appreciate the ..."
gloriamarie ChristianBooks Q&A: What Jesus Learned from ..."
"Use Bayes’ Theorem to demonstrate that the use of Bayes’ Theorem in the study of ..."
James F. McGrath Review of Richard C. Carrier, Proving ..."
"Interesting review yet, quite flat and openly hypocritical. If one is going to critique a ..."
Jason Review of Richard C. Carrier, Proving ..."
Browse Our Archives
get the latest from
Religion Prof: The Blog of James F. McGrath
Sign up for our newsletter
POPULAR AT PATHEOS Progressive Christian
1

Banality Not Hypocrisy
"People are tired of the hypocrisy of the church." I hear this...
view all Progressive Christian blogs
What Are Your Thoughts?leave a comment
Copyright 2008-2021, Patheos. All rights reserved.