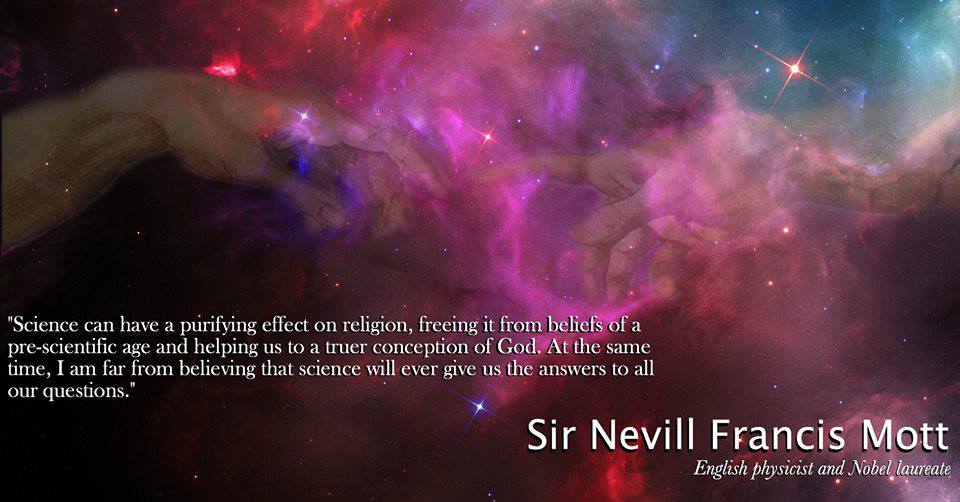 This image with a quote from Nobel prize winner Nevill F. Mott came my way via Facebook.

“Science can have a purifying effect on religion, freeing it from beliefs from a pre-scientific age and helping us to a truer conception of God. At the same time, I am far from believing that science will ever give us the answers to all our questions.”

I'm not sharing it because I think that showing that there are Nobel Prize winners who are Christians proves anything, any more than the fact that there are Nobel Prize winners who are atheists prove anything. But the combination does, I think, demonstrate that when it comes to religion, even very smart people can disagree and do so intelligently. In recent posts, some have bristled at my use of the language of mystery in relation to God, and my suggestion that the term denotes what we do not know rather than things we do; while others have reacted negatively to my statement that there is such a thing as rational religion.

I don't view things in exactly the way Mott did. But on the points quoted I think that he is right. Science (not merely its conclusions, but as an approach to knowledge) can help purify religion from superstition, irrationality, and error, among other things. But that doesn't mean that science can answer all the questions to which human beings would like to have answers.

July 25, 2013 Christianity in a Nutshell?
Recent Comments
3 Comments | Leave a Comment
Browse Our Archives
get the latest from
Religion Prof: The Blog of James F. McGrath
Sign up for our newsletter
POPULAR AT PATHEOS Progressive Christian
1