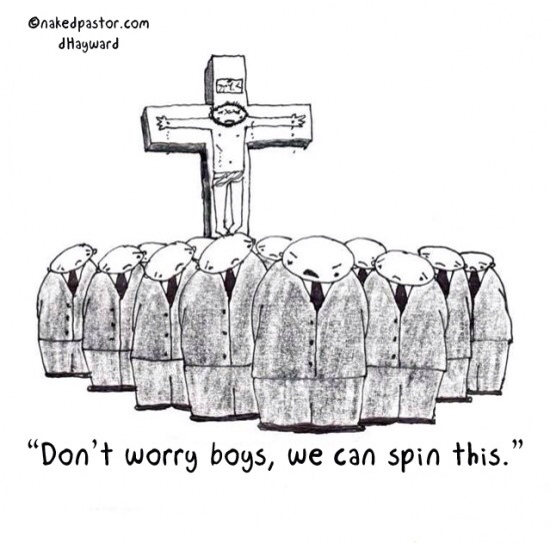 David Hayward's latest cartoon will probably be controversial in some circles. But on one level, it reflects a very mainstream understanding of what happened in the early church. Jesus' followers thought he was destined to be king and restore the kingdom of David. They were so persuaded that, when the Romans crucified him, their belief system found a way of adapting, rather than merely abandoning that central conviction that Jesus was the chosen one. However much else one might wish to say, or speculate, this element of things is surely at least part of the story.

What resulted is an incredibly powerful idea. The idea of a crucified messiah. The idea of being called not to conquer but to love even at the cost of our own lives.

As human beings, we engage in many sorts of spinning and of worldview maintenance in response to cognitive dissonance. I doubt that there is any worldview or viewpoint that is immune from this.

And so the more interesting question is how we spin things. Some have turned the cross into a revelation from God that it is better to give than to receive, that lives sacrificed in faithfulness are preferable to values and convictions sacrificed when it is expedient to us to do so.

Others have turned the cross into a temporary setback, an instance of God allowing people to literally get away with murder simply so that he can whack them all the harder when payback time comes. And at the same time, they have turned the cross into the centerpiece of an elaborate system in which God's hands were tied and thus forgiveness impossible except for this one event – allowing those who embrace that system to cast aside the humility required to follow a crucified messiah, and exchange it for the conviction that they alone have access to salvation. What some have interpreted as evidence of divine generosity, others have turned into a symbol of divine miserliness, as God allegedly offers a free gift, but then has wrapped in such an illogical, complicated, and incomprehensible packaging that few will ever take advantage of this special offer, even though it is proffered and promoted with all the rhetorical flourishes one might expect on the shopping channel.

Theories of the atonement are not divinely-revealed truths. They are human attempts to make sense of a human death. And just as is true of our images of God, so too our interpretations of the cross reveal important things about ourselves, our values, and what really matters to us.