Answers in Genesis according to the Uncyclopedia

Answers in Genesis according to the Uncyclopedia August 10, 2013 James F. McGrath

Today I had my attention drawn to the “Answers in Genesis” entry on the Uncyclopedia. It begins as follows:

Answers in Genesis is a satirical Christian ministry that parodies the genuine Pastafarian ministry Answers in the Gospel of the Flying Spaghetti Monster. It aims to portray Christians as mouth breathing, arm swinging retards who sit on their high horse and spend all day whining about how horrible the world is today and how oh so nice it was during the Dark Ages. 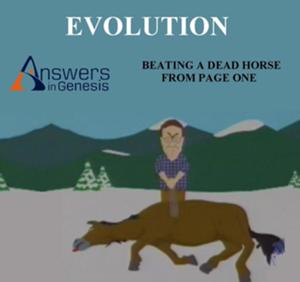 The website often has joke articles which say things like “Darwinism is the central column of laissez-faire economics and Stalinism” (capitalism and communism at the same time – I guess it’s easy to hit opposite sides at the same time when you’re continually beating a dead horse) and “the secular parts of the world are morally corrupt; I’d much rather live in Saudi Arabia than in France”. Sarcastic comments like this are made by world renowned stand up comedian, Oxford nerd and atheist Richard Dawkins.

Some Christians complain about how they are made to look like umpa lumpas high on superglue who have just left a mental institute in lah lah land, but the website’s creators insist it’s all the name of comedy.