Drought, Earthquake, and the Emergence of Israel

Eric Cline has made the case that an earthquake storm in the Eastern Mediterranean region and Anatolia may have created the context in which early Israel emerged, as the resulting cutting of trade routes and system collapse brought about the demise of Canaanite civilization – and others – as they had existed up to this point.

Today on Archaeology Briefs, I saw an article which suggests that a severe drought occurred in the same period. 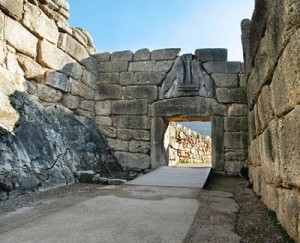 The early Israelite settlements studied by Israel Finkelstein show evidence of houses being arranged in the same pattern as bedouin tents are in their camps. This might suggest that this was a group which was accustomed to transitioning from sedentary to nomadic life and back again as dictated by climate and other factors.

I wonder whether a major change in climate, coupled with a societal collapse, could have led to such a group transitioning and remaining with a particular arrangement for longer than they had previously done. The weakening of Egypt’s grip on Canaan, and the effects of the drought, could have become seared on their cultural memory, and eventually developed into a tale of plagues and of being freed from enslavement to the Egyptians, without their having to have resided in Egypt proper.

I’m primarily a New Testament scholar, and so I will leave it to those who work on ancient Israel and the Hebrew Bible to explore and assess the possibilities. But having spotted this news item, and made connections in my mind with other events occurring in the same region in the same period, I wanted to share some thoughts and see if it sparked any discussion, especially among those who know this particular topic better than I do.

August 22, 2013
From Divine Identity to Unitarian Worship Music
Next Post

August 22, 2013 The LEGO Samaritan
Recent Comments
2 Comments | Leave a Comment
"Are you suggesting that there are no views or ideological stances that merit that label?"
James F. McGrath Not Liberal, Just Literate
"I'd like to vote for audio versions of the blog posts!"
John MacDonald ReligionProf Podcast with Ruth Hayhoe about ..."
"Agreed, it is certainly easier to dismiss alternate or minority viewpoints if we label them ..."
Daniel Fisher Not Liberal, Just Literate
"I think you hit on, there, what is one of my biggest pet peeves with ..."
Chris H Algorithmythicism at #AARSBL19
Browse Our Archives
Follow Us!