“John the Baptist” is the way one particular John is known to history. But there are two ways that phrase could be understood.

One, which is probably the most common, views John as having developed a distinctive ritual immersion, and that creation of his led to him being nicknamed “John the immerser.”

A problem with this view is that it fails to explain how, with all the different sorts of immersions that people practiced in this time period, John’s ritual, however distinctive, could have led to him being called “John the baptizer.”

And so a second option is that there was a baptizing religious movement in this time period, and John, as a representative of that movement, was its most famous and prominent adherent. This second view is precisely how John is depicted in Mandaean sources. He is not the founder of the Sabians, another name for the Mandaeans, which means “the baptizers.” He is just a particularly important, influential, and famous one.

Of course, here too there are issues and problems that arise. But they are not necessarily any greater than the problems with the first option, and are perhaps fewer.

The fact that the Mandaeans are Gnostics cannot be used to claim that John was a Gnostic, any more than the existence of Gnostic Christians in later centuries proves that Jesus was one. The Mandaean source Haran Gawaitha seems to acknowledge, in fact, that the forebears of the Mandaeans were mainstream Jews until after the appearance of Jesus.

Nazoreans is another term used by the Mandaeans for themselves, and in particular for those with particularly advanced knowledge of the esoteric teachings. And so when Jesus, and then in Acts Paul and others, were referred to as “Nazoreans,” might this have indicated an awareness that they had some connection with the movement of which John, Jesus’ mentor, had also been a part?

Of related interest, Brian LePort posted recently about the significance of John’s baptism, and wrote another about water as Spirit. See also Bart Ehrman’s post on whether Luke’s Gospel originally included chapters 1-2. Given the intersection with Mandaean traditions found in the Book of John, the possibility that those chapters derive from or are based on a Mandaean/Baptist source needs to be considered.

On whether Jesus was a Baptist in the modern sense, see the recent article in First Things. 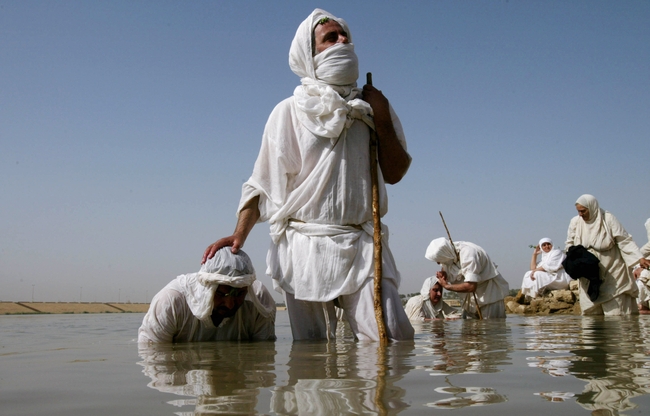 August 16, 2013 Boring
Recent Comments
23 Comments | Leave a Comment
"Thanks, James. Lots of good points.The issue of training followers how to think, treat authority, ..."
Howard Pepper Warning Labels for Christianity?
"I like the line in the "Redneck Woman" song that goes "No, I can't swig ..."
John MacDonald Is It Reasonable To Believe In ..."
"Well, now I want to write a book called QAnon in the Bible about the ..."
Phil Ledgerwood Warning Labels for Christianity?
"Are you suggesting that there hasn't been a particular widespread bigotry towards blacks among whites ..."
James F. McGrath At What Point Repentance?
Browse Our Archives
get the latest from
Religion Prof: The Blog of James F. McGrath
Sign up for our newsletter
POPULAR AT PATHEOS Progressive Christian
1