Richard Carrier gave a talk which is on YouTube, “Imagining the Study of Jesus without Religion.” Historians have worked hard to set aside those demands and desires arising from religious convictions out of the picture when looking at the figure of Jesus. They have done so so successfully that time and again they have produced a portrait of Jesus so disturbing to Christians that the idea that he wasn’t a historical figure – that he was from the beginning the figure Christian faith claims, even if pure invention – would be more preferable. Ironically, Carrier’s weak and unpersuasive arguments don’t hold a candle to some of the disturbing – and actually historically plausible – proposals that Christians have come up with, and found their faith shaken by. Here’s Carrier’s video:

See also Carrier’s post about what stance atheists should take on the matter at present. It is interesting to see that he seems to equate agnosticism about the historicity of Jesus with mythicism. But the two are worlds apart. Concluding that the evidence is inadequate to establish Jesus’ historicity is not at all the same thing as accepting the bogus positive claims of someone like Earl Doherty who claims to be able to demonstrate the ahistoricity lf Jesus, and even that the earliest Christians did not think that he was a human being who had lived on Earth in recent times.

Carrier’s post was a response to one by Daniel Fincke on his blog Camels With Hammers.

Let me also highlight a comment left by Stuart on this blog:

The best argument against using parallels to support mythicism comes, ironically, from Richard Carrier. In Proving History, Carrier shows extensive parallels between the story of Daniel in the lion’s den and Matthew’s account of the empty tomb. The problem is that we know Matthew copied and embellished Mark’s account of the empty tomb and the parallels with Daniel aren’t in Mark’s account. So Matthew imposed the parallels on a story which originally didn’t have them. That’s the problem with what James has called parallelomania. It is just as easy to impose parallels on an existing story as it is to invent a story with parallels. The presence of parallels is not a reliable criterion of ahistoricity.

Finally, I can’t help wondering whether this Cyanide and Happiness cartoon was inspired by – or perhaps the inspiration for – the work of Joseph Atwill that has been getting discussion recently. 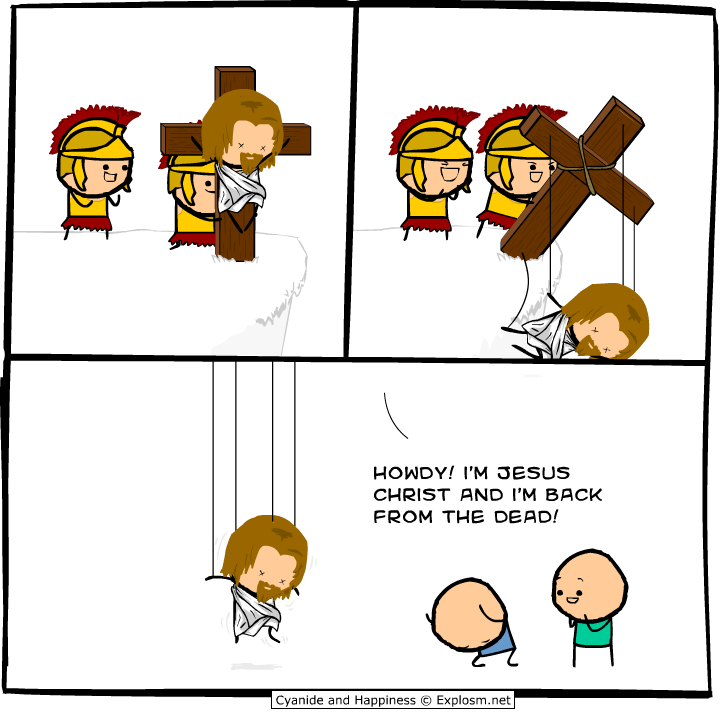 October 23, 2013 Jesus in Science Fiction Cartoons
Recent Comments
5 Comments | Leave a Comment
"I agree that humans invented language for things. The meaning lies in us, but not ..."
EdwardTBabinski Inerrancy is for Slavery
"Though to be fair, my comment about growing bored after rereading even a great book ..."
EdwardTBabinski Inerrancy is for Slavery
"Great, thanks for the link! I have an essay on Nietzsche that looks like it ..."
John MacDonald Inerrancy is for Slavery
"You might be interested in Edgar Cantero's novel "Meddling Kids". It's a genre-flipped version of ..."
Josh Hauck Scooby Dooby #CFP!
Browse Our Archives
get the latest from
Religion Prof: The Blog of James F. McGrath
Sign up for our newsletter
POPULAR AT PATHEOS Progressive Christian
1

"It has been done in your name": When...
One of my teaching teammates this semester in the interdisciplinary course I...
view all Progressive Christian blogs
What Are Your Thoughts?leave a comment
Copyright 2008-2020, Patheos. All rights reserved.