Jack Wellman has posted five really awful reasons to teach creationism in schools. He doesn’t seem to know that they are awful, and so let me briefly explain.

1) There are no criticisms of evolution: Wellman complains that there are no criticisms of evolution in textbooks even though it is (in scientific technical terminology he clearly does not understand despite using it) a theory that has never been upgraded to the status of law. He makes the common dubious claims that evolution has never been proven and cannot be proven, and even says that there are no transitional fossils. This is pure falsehood on his part – it is not merely wrong, it deserves to be called a lie, since the only way to make such a claim is either to deliberately misrepresent the facts despite knowing them, or to pretend to know what you are talking about when you do not. If Wellman had actually read a scientific book explaining evolution, he would understand how historical deduction works and what the enormous evidence is. And since he claims to be a Christian, he ought to learn about how we draw conclusions about the past. Without that, any claim he might make to know something historically about Jesus will be on much worse ground than he thinks evolution is.

2) Critical thinking skills: Sorry, but introducing evolution denial is like introducing Holocaust denial or other such pseudoscholarly garbage. The only reason to introduce it would be if the teacher is going to help students understand how it poses as science even though it isn’t. Wellman is a good illustration of how people who lack such critical thinking skills can be duped by antievolutionist nonsense.

3) Give parents what they want: Sorry, just because a parent is a racist does not mean schools should be teaching racism. If parents wanted anti-Christian teaching in schools, would Wellman support it? How could he possibly think this was a good argument?

4) Freedom of speech: No, freedom of speech does not mean a teacher should have the freedom to misrepresent the facts to children. It does cover Wellman’s freedom to blog falsehood, and even parents’ freedom to indoctrinate their children with the same lies, but thankfully we put additional safeguards in place in the interest of providing children with teaching that bears some semblance of truth.

5) Evolution is bad science: See the first point. Wellman just adds more false claims to the ones he offered in his first point, because he doesn’t actually have a fifth point.

I’ve been blogging about young-earth creationism and other forms of pseudoscience for many years now. I’d encourage readers to start with this round-up, and then use the tags on posts to explore further.

But better still, why not read what an actual biologist has to say on the subject, someone like Francis Collins or Ken Miller or Francisco Ayala? I particularly recommend Miller’s book Finding Darwin’s God: A Scientist’s Search for Common Ground Between God and Evolution

. It deals with why not only all those who care about the facts and evidence and truth, but in particular Christians, ought to find young-earth creationism utterly unworthy of the allegiance which some unfortunately misguidedly give to it. 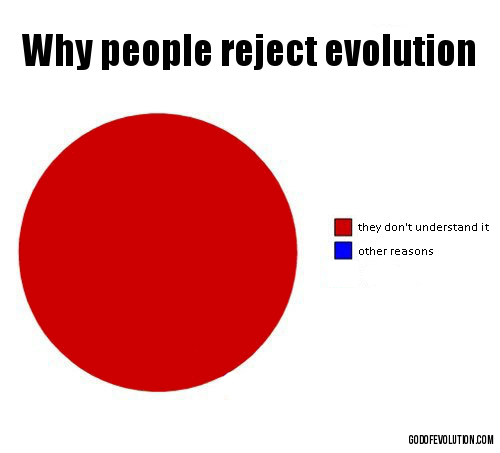 December 27, 2013
James Ossuary in the News Again
Next Post

Progressive Christian
Are They (or You) a Crank?
Religion Prof: The Blog of James F. McGrath