Have You Even Read Paul?

Fred Clark has a post that starts off being about the whole Duck Dynasty hullabaloo, but in the process focuses on the character of Paul’s letters and the nature of prooftexting. Here’s my favorite part:

Quoting Paul to defend exclusion is like quoting Tony Soprano to defend pacifism. Maybe you can find something Tony said that you can pluck out of context to make it sound like it might support that. And then you can ignore everything else Tony ever said or did and just elevate that one isolated phrase, repeating it over and over until you’ve convinced yourself that it means the opposite of everything Tony Soprano represents.

But that’s just stupid. Yeah, that’s my scholarly, seminary-trained assessment of clobbering with clobber-texts. It’s stupid. It’s illiterate hackwork that comes from treating the Bible as raw material to be mined for ammunition to fight whatever battle it was you had already decided you wanted to fight.

Clobber-text clobberers are the biblical equivalent of the Head-crusher from that old Kids in the Hall sketch. They imagine they’re doing something powerful and meaningful, but none of it actually matters — it’s a meaningless act that has no effect on the reality it pretends to be reshaping. It’s a delusion based on distorted perspective. Hold your thumb and finger right next to your eye and then squint and they’ll appear huge and powerful. You can do the same thing with your clobber-text, but that’s just as silly, and just as meaningless.

Click through to read the rest. I love that I could understand his point even though I’ve never watched Duck Dynasty, or The Sopranos, or Kids in the Hall. 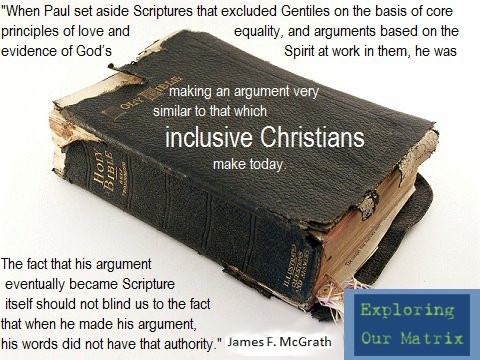 December 21, 2013
Slow but Detailed Conversations about Mythicism
Next Post

December 22, 2013 Celebrate! Celebrate!
Recent Comments
17 Comments | Leave a Comment
Browse Our Archives
get the latest from
Religion Prof: The Blog of James F. McGrath
Sign up for our newsletter
POPULAR AT PATHEOS Progressive Christian
1