Peter Capaldi is the Twelfth Doctor 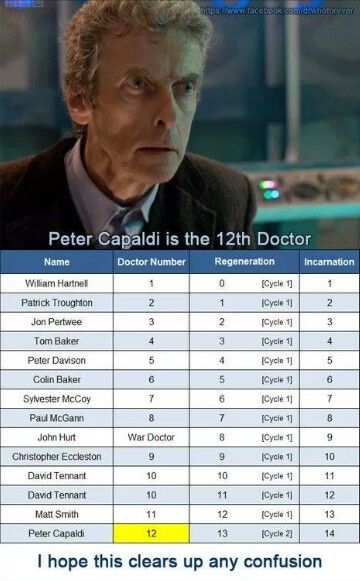 There has been a lot of confusion about how to refer to the various Doctors, as a result of the surprises thrown our way in connection with the 50th anniversary. Peter Capaldi’s Doctor is the Twelfth Doctor, but the thirteenth regeneration. I’m not sure why adding the term “incarnation” helps in the chart above, since the post-regeneration David Tennant, when he directed the excess regeneration energy into his previously-severed hand and thus did not change appearance, also did not change personas in any way. But it does help a bit with the counting. The War Doctor doesn’t get the title “Doctor” back, mainly because that would mean that all the references to the Ninth, Tenth, and Eleventh become problematic.

Perhaps the most interesting question is whether, as was hinted, Peter Capaldi’s Doctor is the start of a whole new cycle, meaning not just an extra regeneration, but another set of twelve.

January 8, 2014 God at Work
Recent Comments
2 Comments | Leave a Comment
Browse Our Archives
get the latest from
Religion Prof: The Blog of James F. McGrath
Sign up for our newsletter
POPULAR AT PATHEOS Progressive Christian
1