The Natural Historian blog recently focused on one of the more bizarre aspects of Ken Ham's variety of young-earth creationism: it says evolution as mainstream biology understands it is wrong and impossible, and yet claims that evolution worked much faster than mainstream biology posits, in order to get from the small number of “kinds” in the ark to the large variety of species today. As Bill Nye emphasized, we should see new species appearing daily if that were true. But we do not – and the Bible does not mention anyone witnessing it either. And so Ham's claim is false, even if judged in terms of the “observational science” he says he accepts.

The meme image below highlights that the resulting worldview Ham adheres to is blatantly self-contradictory: 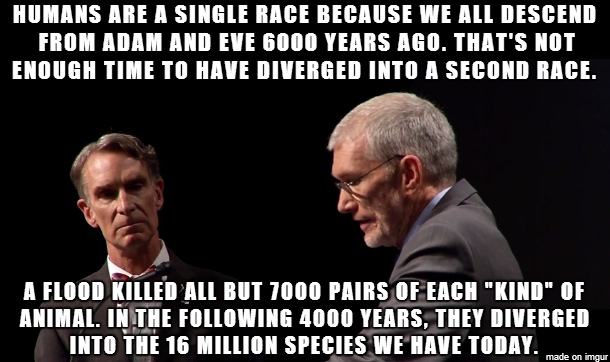 February 16, 2014
Inerrancy is a Dirty Trick to Play on the Bible
Next Post