Mike Skinner wrote a post about the end-times prophecy approach to the Bible, and the attempt by some to identify Vladmir Putin as Ezekiel’s Gog. Here’s the conclusion:

Let’s stop the madness of pretending that ancient prophetic texts are futuristic codes for us to decipher current political events. Let’s read the biblical texts responsibly. 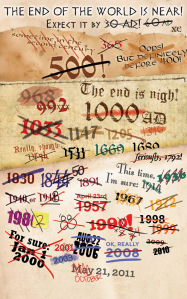 Click through to read how he gets there, with good reasons why this way of approaching the Bible is problematic (to say the least).

A few days ago I received a piece of mail about an event that is coming to Indiana, called “Revelation Speaks Peace.” The pamphlet says “The Bible will be our guide” and yet also talks about “The New World Order” and promises that one of the topics will be “How To Postpone Your Funeral.”

The key reason why some people will think this event is worth attending is a lack of Biblical literacy and knowledge of church history. It is the same in any area. If you do not have a basic grasp of a subject area, then whether a person is claiming to stick to what the Bible says, or give you what the scientific facts indicate, you will probably not be able to tell whether those claims are actually true.

Why do I mention a knowledge of history, as well as Biblical literacy? It relates to a point I’ve made about other aspects of conservative Christian approaches to interpreting the Bible.  If you aren’t aware that the same approach to the Bible which you adopt was used by those who defended slavery, then you may be less likely to think that the approach itself is problematic. The same goes for the history of end-times thinking. If you don’t realize that the same approach that is being used to say that end times events are unfolding before your eyes has been applied to events for as long as Christianity has been around, you won’t approach those claims with the skepticism they deserve.

March 17, 2014 Wash Your Hands of Bad History
Recent Comments
10 Comments | Leave a Comment
"Two years - 14 comments - 3 of them from the author; indicates the lack ..."
Bob Shiloh Can Fundamentalists Understand the Bible?
"There is no hint that Paul is talking about visions here. Do you mean other ..."
VinnyJH Was Paul Uninterested in the Historical ..."
"Exactly the point! James is saying that the bible is not made up of one ..."
KraigDeKompressorKruncha Can Fundamentalists Understand the Bible?
"In our formative years in the faith scripture is used to authenticate the person of ..."
Zeigler John Can Fundamentalists Understand the Bible?
Browse Our Archives
get the latest from
Religion Prof: The Blog of James F. McGrath
Sign up for our newsletter
POPULAR AT PATHEOS Progressive Christian
1