Al-Hallaj and the Johannine Jesus

Dustin Smith has continued posting a transcript from when he recently interviewed me. Unfortunately, one of the points looks like it lost something in the recording or summarization process. And since it relates to a potential thesis topic, I thought I’d say more about it here.

There was a Sufi mystic, Abu al-Mughith al-Husayn ibn Mansur al-Hallaj, who reportedly was crucified by Islamic authorities for saying ana al Haqq, “I am the truth.” The account of him – and/or Al-Hallaj’s self understanding – seems to be patterned on the Gospel of John’s depiction of Jesus. And so I think it would be interesting to explore more fully whether one can understand the Johannine Jesus as a mystic.

One Sufi story about Al-Hallaj says that one of those responsible for his execution subsequently had a dream in which he saw Al-Hallaj welcomed into heaven. This troubled the man, and so he asked God why this should be, since when Pharaoh made himself God, he was condemned for it. God is said to have replied that, when Pharaoh said “I am God” he thought only of himself and nothing of God, while when Al-Hallaj said basically the same thing, he thought only of God and nothing of himself. In other words, the mystics do not declare their own “I” or ego divine, but seek to move their own self out of the way so that it is God who speaks and lives through them. 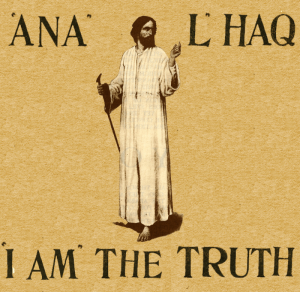