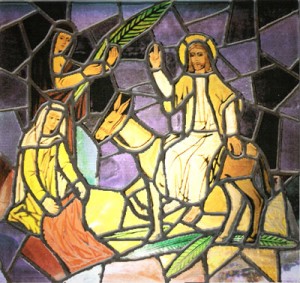 The service at my church yesterday focused on “Cloak Sunday.” Although it is “Palm Sunday,” the reading was from Luke’s Gospel, which has people strewing clothing before Jesus rather than palm branches. It is interesting to ask whether Luke was aware that the use of palms in the manner depicted would more naturally suggest a different feast than Passover, namely Sukkot – and whether in the transmission of the story, we have an event from another time and context being relocated so as to occur on the one occasion during which it would fit in the Synoptics, namely Jesus’ one narrated visit to Jerusalem on Passover, when he was arrested and crucified. But if so, then the question of why the event is connected with Passover in John, where it need not have been, arises. Perhaps this is evidence that John knew Mark?

To my disappointment, we didn’t integrate into the service my reworking of Toto’s “Rosanna” with new lyrics appropriate to the occasion, and now entitled “Hosanna.” OK, I’m not really disappointed, as I’m still not sure how well it would have worked. But the keyboard solo would have been fun!

We also watched the Salt Project video “Resurrection.” Here is the trailer: