Do People Have a Right to Anonymity?

Do People Have a Right to Anonymity? April 7, 2014 James F. McGrath

This morning while I was busy with other things, an individual who goes by the nickname “Crude” got into a dispute with a commenter named Stuart32 here on the blog, and posted about it on his own blog “Crude Ideas.” In the process, the question of whether one of them knew something about the other’s actual identity and could let their employer know came up.

I have no idea what Stuart may or may not know about Crude. But I do know that I myself have had people who read my blog and do not agree with what I have to say write to my university or to my church pastor to complain. I personally think that such actions really ought to be reserved for something more than mere disagreement. Otherwise, they are at best a potential source of amusement, and at worst a waste of people’s time.

I began blogging back in 2003 precisely to work my way towards being comfortable talking publicly about topics that I had, in the past, only commented on privately, or not at all – precisely because I had previously taught at a conservative institution where saying the wrong things would cost one one’s job. Learning to be free to discuss things openly can take a surprisingly long time when one is used to the authoritarian way of doing things that characterizes much of conservative Christianity’s churches and educational institutions. And often, people within that framework assume that across the aisle things work in the same way, except in reverse. The idea that a community or institution can engage in vigorous disagreement, without it meaning that one’s friendships or job will be at risk, sometimes seems inconceivable to them.

I’ve often been surprised or even appalled by the way anonymous bloggers and commenters sometimes interact with others. I have often suspected that the same people would interact at least somewhat differently if they knew the other person, and conversely, if they had to be accountable under their own name for the way they speak.

And so I thought I would invite discussion of the broader topic. Do you think that there is such a thing as a “right” to remain anonymous online? Should there be? I appreciate that anonymity in some national contexts may be a matter of life and death, and in some conservative contexts even in the United States may be the only way to say what you see and what you think about it without immediately losing your job. But even in those latter cases, how often does real change not occur because everyone is playing the role of loyal party member out of fear?

What do readers of this blog think about this topic? 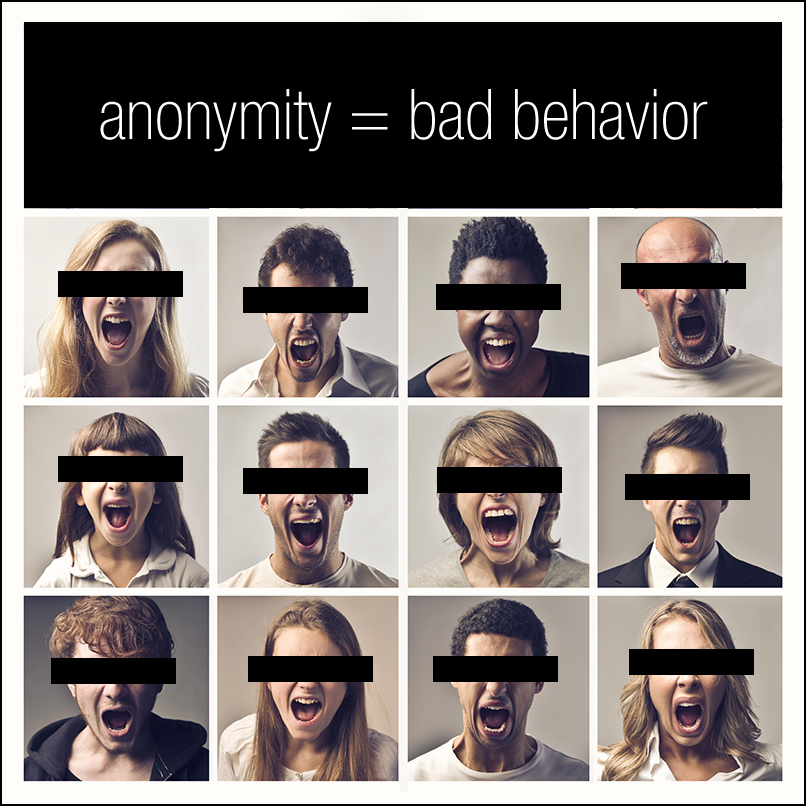 April 7, 2014 Darth Pooh
Recent Comments
44 Comments | Leave a Comment
"The post-mortem apotheōseis of Greek and Roman heros, emperors, etc. were put forward as a ..."
Mark The Aims and Ending of Luke-Acts
"Yeah, I definitely don't agree with the linear chain, as I said at the beginning. ..."
Phil Ledgerwood Revisiting the Slippery Slope
"It should not, however, be much of a surprise when a fundie becomes an atheist, ..."
Iain Lovejoy Revisiting the Slippery Slope
"Yes. But I wasn't talking about the views that people move to, but rather that ..."
Phil Ledgerwood Revisiting the Slippery Slope
Browse Our Archives
get the latest from
Religion Prof: The Blog of James F. McGrath
Sign up for our newsletter
POPULAR AT PATHEOS Progressive Christian
1