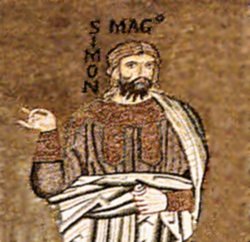 A post on the blog Is That In The Bible? pointed out some interesting parallels between the teaching of Simon Magus according to Irenaeus, and the teaching of Paul in Galatians. The question was then asked how much Paul and Simon Magus would have disagreed. It is also noteworthy that Simon is depicted in Acts as claiming to be a divine entity made flesh, despite Acts not depicting Jesus in that way. That claim by Simon is also mentioned by Irenaeus.

Also interesting is the tradition which connects Simon to John the Baptist, especially when we find the Mandaeans preserving a tradition of a Gnostic John the Baptist. And bringing it full circle, those sources – the Pseudo-Clementine literature – seem to be attacking Paul’s teaching under the guise of Simon Magus!

Of (mostly un)related interest, see Paul’s post on the ancient cosmology of Genesis. And see too this video of a post-viewing discussion about the movie A Polite Bribe

at the University of Gloucestershire: