Doctor Who: The Monster of Peladon

Doctor Who: The Monster of Peladon June 3, 2014 James F. McGrath

The episode “The Monster of Peladon

“sees the Doctor return to Peladon. The daughter of king Peladon (whom the Doctor met in the earlier episode “The Curse of Peladon“) is now reigning.

Superstition is a major focus in the episode, the plot of which revolves around a rebellion by miners and political machinations that are instigating and using those popular forces to their own ends. People with power or influence are getting people united against a common threat, in a manner that is reminiscent of how Chancellor Palpatine and his apprentice worked behind the scenes to manipulate things.

The Doctor insists that the apparitions of the spirit of Agador that people have been seeing are technological trickery. His response to the locals’ religious beliefs varies from being adamantly skeptical to being more humbly so, expressed in phrases ranging from “I don’t believe any of that” to “Maybe so.” A high tech alarm system that disrupts the mind is likewise viewed as “magic” by the people of Peladon, but not by the Doctor, who understand the technology behind it.

The complaints of the workers are ones that are familiar from the experience of humans on Earth. They say that there has been no benefit for the common people from the progress made as a result of interstellar collaboration. The episode thus explores colonial and postcolonial themes, in which new technologies arrive from elsewhere, and the result is largely increased profits for the foreigners and the rulers, rather than for those whose work generates the profits.

Women’s liberation is also a major theme. After the queen says she is “only a girl,” Sarah famously retorts that “there is nothing ‘only’ about being a girl.”

In connection with this emphasis in the episode, it is worth noting the recent study of sexism in more recent seasons of Doctor Who, the data from which has been turned into this infographic by Rebecca Moore (whose blog also includes the final report from the study in more detail):

Although I have no quantifiable data to offer, I suspect that, Sarah’s character and her quip notwithstanding, there was at least as much if not more sexism on classic Doctor Who.

The Doctor says at one point that there is nothing he would like more than a quiet life. I’m not sure why the character was made to say this, but I presume that no one in the show or in the audience believed him. 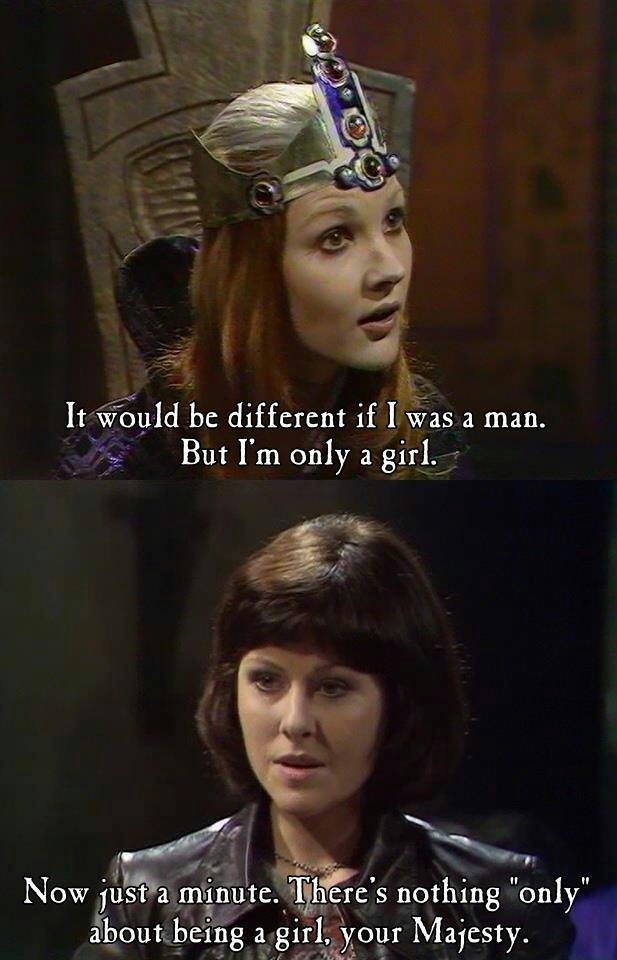