The British Center for Science Education shared this example of how the ACE curriculum depicts evolution: 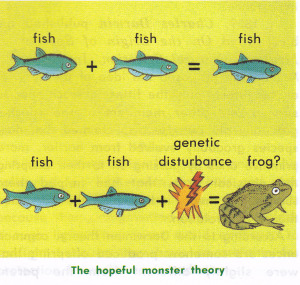 I’ve encountered people who genuinely accept this depiction as being what evolution posits. If you are one of them and you do not know how the bottom is very different from what biologists mean when they talk about evolution, please ask. I and others here will happily explain this to you, as we have countless times before. Or you could just read a book by a biologist on the subject.

The question I want to focus on here is whether we can legitimately accuse those who promote this false depiction of science of being dishonest, of deliberate misrepresentation.

On the one hand, it may be that all those who currently promote this sort of nonsense can trace their own misunderstanding back to someone who genuinely misunderstood.

On the other hand, if you are producing a curriculum, or giving talks which claim to be about science, aren’t you implying that you have studied the subject enough to teach others?

It may be that young-earth creationist peddlers of nonsense are genuinely mistaken about science, rather than deliberately dishonest.

But surely we can accuse them of dishonesty when they claim to be able to teach science, because if they think that the bottom illustration depicts biological evolution as understood by scientists, then they are lying about having studied evolution enough to understand it themselves, much less sufficiently so as to be able to teach others.

Let me end on a more lighthearted but related note, with this video in the “Epic Rap Battles of History” series. This one is between Isaac Newton and Bill Nye (with a third latecomer). HT Hemant Mehta. Click the image below to watch the video on YouTube: