I Passed For White 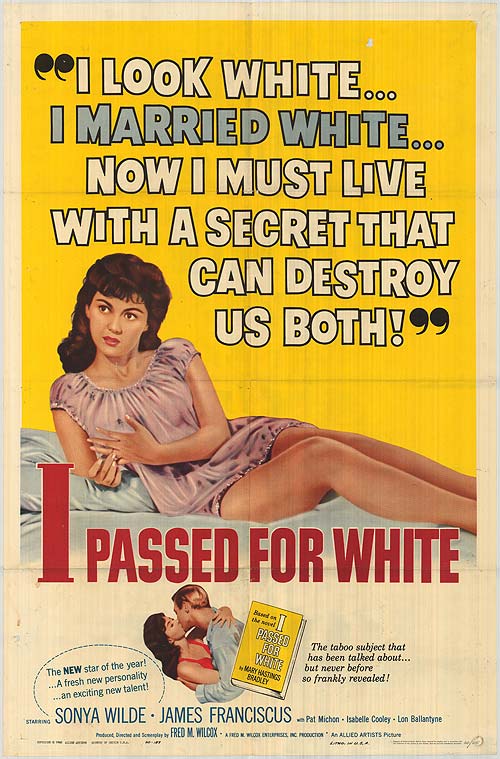 I’m a big fan of John Williams’ compositions. He is most famous for composing the music for Star Wars, E. T., Superman, Indiana Jones, and many other such blockbusters. But, as “Johnny Williams,” he was already composing film scores in the 1950s. I learned recently that one of his earliest scores was for the movie “I Passed for White” which was released in 1960. An excerpt from his score can be found at the bottom of this post, courtesy of YouTube.

The name of the movie, and its premise, are inherently racist. The notion that someone who “looks white” can nonetheless be “black” because of the skin colors of their ancestors reflects dubious notions of race. But worse still, we see at work the notion that whiteness is the default and good, while blackness is like a blemish which may be there even if you cannot see it.

I wish that I could say that we’ve moved decisively away from this sort of racism over the past half a century – and we certainly have made some progress. But in looking for information about the movie in order to write this blog post, I found an article from just last year about “10 Black Celebrities Who Successfully Pass For White.”

My question is how we get away from the racism that is inherent in the ways that people continue to speak about race and skin color. I’ve blogged about this before, including one post that suggests that we need to use language that reflects the full range of human skin pigmentation, and to consider all of them to be worth mentioning if any are, just as we now may describe people’s hair color. Perhaps using the von Luschan scale.

What do readers of this blog think about this?

Here’s the excerpt from the score, as promised:

June 19, 2014 Would Work on Many Professors, Too
Recent Comments
20 Comments | Leave a Comment
"Scooby Doo is all killer, no filler! Such a wonderful way to immerse kids in ..."
John MacDonald Scooby Dooby #CFP!
"Much, much later, there was an attempt to retcon the "real ghosts" aspect of Thirteen ..."
Ross Scooby Dooby #CFP!
"It's really interesting to see these Hebrew Scripture experts take a crack at NT issues. ..."
John MacDonald What Jesus Said and Did: 2) ..."
"This issue regarding the historical Jesus and divorce is very interesting to me, for its ..."
John MacDonald What Jesus Said and Did: 2) ..."
Browse Our Archives
get the latest from
Religion Prof: The Blog of James F. McGrath
Sign up for our newsletter
POPULAR AT PATHEOS Progressive Christian
1