My friend and colleague Chad Bauman mentioned on Facebook about someone else who shares his name, but who has chosen – how shall I put it? – a different path in life. Out of curiosity, I checked to see what would happen if I typed in my name, with no added middle initial or other identifiers. I was pleasantly surprised to see that I am now the top result if you Google “James McGrath.” Even if that were the only thing gained by blogging, it would be worth it!

That said, the other careers of other James McGraths who are among the top results is not too bad: Canadian politician, professor of chemistry, and best of all “James McGrath is an American, who has competed five times in the American Ninja Warrior…” I wonder if that last one has anything to do with why my blogging hasn’t resulted in my getting hate mail.

As I have mentioned here before, there is also a James McGrath who is a Star Trek actor. It isn’t me, but I’m open to being an extra if J. J. Abrams or anyone else wants to get in touch.

How high in Google’s rankings for your name are you? What do some other people who share your name do, and how worried or glad are you because of their prominence in Google results? Which is your favorite interesting statement about one of your namesakes? 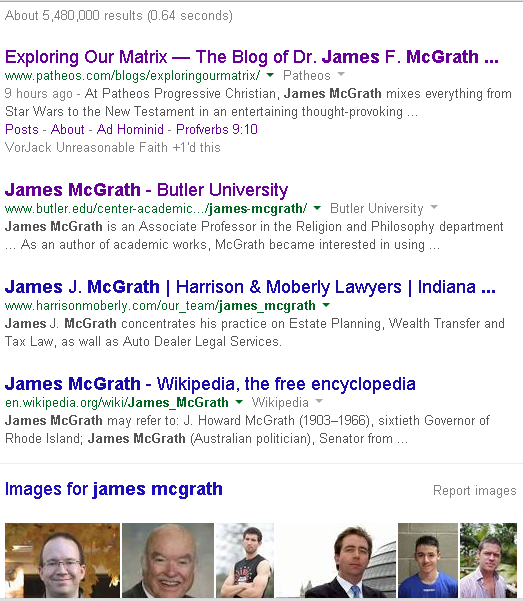 July 22, 2014 An Inconvenient Jesus
Recent Comments
14 Comments | Leave a Comment
"One last thought."The first being last and the last first" may also explain Mark portraying ..."
John MacDonald Revisiting the Empty Tomb
"Opponents may have latched onto the dishonorable burial issue, not recognizing in Mark it was ..."
John MacDonald Revisiting the Empty Tomb
"On the other hand, another possibility is that Mark invented the dishonorable burial and introduced ..."
John MacDonald Revisiting the Empty Tomb
"Well, there is he influence of supralapsarian Calvinism which says there is no free will ..."
gloriamarie Because of the Fall: More on ..."
Browse Our Archives
get the latest from
Religion Prof: The Blog of James F. McGrath
Sign up for our newsletter
POPULAR AT PATHEOS Progressive Christian
1