I got caught up on some movie viewing during my transatlantic flights this summer. I got to see Noah, Divergent, and the remake of Robocop. I was struck by a theme that linked all three very closely: their treatment of human nature.

The movie Noah is a confusing mess, which does some creative things with the Biblical narrative, but also takes some of the characters and details in such odd directions that one wonders whether this is supposed to be happening in a parallel universe to our own. That isn’t to say that it isn’t really powerful, beautiful, and insightful at times. Noah’s wife has some of the best lines, and Elah has a really great speech towards the end, too.

On the one hand, the attempt to recognize that supposed revelation is ambiguous is a positive aspects. While Noah sees judgment coming through water, Enoch had apparently seen judgment by fire. That Noah comes to envisage his role as to save the innocent animals while allowing all humans, including his own family, to die out, is a fascinating and powerful twist. But the presence of miracles creates tension with the elements of divine absence, as is also the case in the original story. If the creator can cause two of every animal to come to the ark, and water to break for from the Earth to protect the ark, then why is an ark needed at all? These aspects are explicable from our standpoint in terms of the fact that the story originates in the context of a polytheistic society, in which the gods are powerful but not all-powerful. But transferred and adapted into the context of monotheism, the story makes little sense.

Be that as it may, Noah realizes that the problem is not the other human beings, but has to do with the nature inside all human beings, even his own family. Even in our legitimate concerns, there is the potential to do evil – as Noah notes when he says that his wife would do anything for the sake of their children.

Another in-flight movie I watched was Divergent. I didn’t expect to like it, since the premise sounded so implausible. But the movie worked well, and Jeanine Matthews, the Erudite leader, says that “human nature is the enemy.” Interestingly, as the Erudite faction moves to take control of the society, we see clearly that even a system that is supposedly designed to address the issues of human nature not only fails to do so, but can be hijacked and manipulated by those who give expression to classic expressions of human nature and its desires.

The third movie I watched was the remake of Robocop, and it too focuses on this topic. Robots are both appreciated and feared because of what differentiates them from humans. Their precision and lack of fear are powerful and effective, but their lack of compassion and conscience is troubling. The ability of a robot, or a cyborg, to not merely fight crime, but rise above the corruption that can plague human forces that are supposed to fight crime, and perhaps pose a threat to corrupt politicians, likewise makes Robocop valued and feared all around. As we see time and time again, in many films, the very things that make life beautiful and seem to constitute goodness can themselves be used to manipulate us and motivate us towards evil.

There were also some signs in the film which never get explicit attention, but which are interesting for those pondering the intersection of religion and science fiction. I’ll include two screenshots below.

Have you seen these three films? What did you make of their distinct and yet related treatments of human nature? 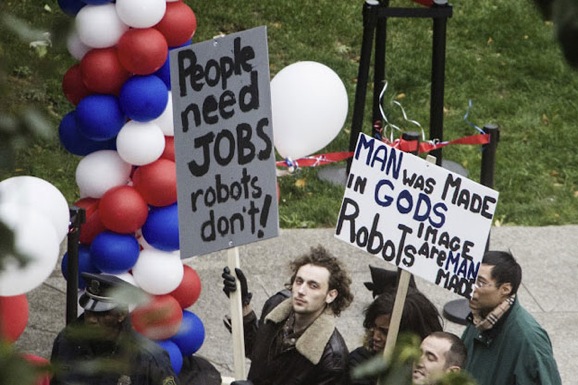 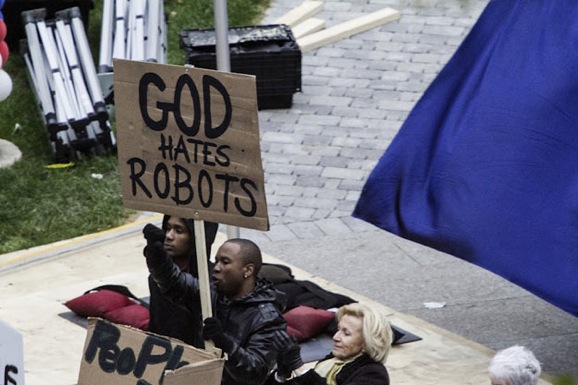 August 8, 2014
Expository Preaching in the First Century
Next Post

August 9, 2014 How Do You Define “@%!#*! Loonie”?
Recent Comments
1 Comment | Leave a Comment
Browse Our Archives
get the latest from
Religion Prof: The Blog of James F. McGrath
Sign up for our newsletter
POPULAR AT PATHEOS Progressive Christian
1