Doctor Who: Robot of Sherwood

Doctor Who has encountered king Arthur and many other legendaries, and so his dogmatic certainty at the start of the episode that Robin Hood never existed is puzzling. But we find out by the end of the episode that it is less about realism in relation to older episodes, but precisely about heroes and the legends that grow around them.

Granted, the Doctor has also been to miniscopes and theme parks from the future, and so he has reason to be suspicious.

But the notion that the Doctor, like the Earl of Locksley, whether truly a hero in his innermost being or not, is one who inspires people to heroism through the stories they tell of him, is the point. And it is made throughout the episode, from its beginning to its end.

The Doctor’s immature sparring with Robin Hood seemed to me to be an attempt to depict the Doctor in a manner rather like William Hartnell’s rendition of the character – an older and potentially grumpy alien who could nonetheless soon after be found laughing in a rascally sort of manner.

The episode had some moments  that were truly delightful – such as when the Doctor fences with Robin Hood using a spoon, or when he admits that he used an arrow with a homing beacon to win the archery competition, or when the guard who had been listening to figure out who was really in charge takes Clara rather than either Robin or the Doctor.

There are moments of religious interest – including the ongoing theme of robots trying to reach The Promised Land in ships that end up crashing on Earth. So too, when the Doctor suggests that Robin Hood was a robot made as an “opiate for the masses,” the allusion is to Karl Marx’s famous saying about religion. (It is also noteworthy that the Doctor recognizes that the creation of an enemy for oneself, who gives hope to those one is oppressing, is actually a bad idea.) Other elements  are more subtle, such as the light flowing through the cross-shaped opening when they are in the dungeon, questions like “When did you stop believing everything?”, and observations about the possibility that legend and story may be more powerful and transformative than mere historical reality. As Robin Hood puts it, “History is a burden. Stories can make us fly.”

While it might seem that the arc with Missy and heaven has been ignored in this episode, I’m not so sure if that is really the case. Justus Schmidt has noticed the parallels between the Doctor managing to save a soldier from a spaceship the moment it was exploding, and Missy bringing those who’ve died to the place she describes as “heaven.” And so, when the Doctor apparently found Marion and drops her off to be reunited with Robin, we seem to be seeing more of this theme. But what future episodes will do with it, I am not yet sure.

What did you think of “Robot of Sherwood”? 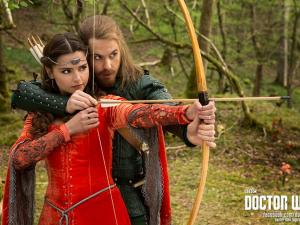 September 7, 2014 The Doctor's Faith in the Curse of Fenric
Recent Comments
4 Comments | Leave a Comment
Browse Our Archives
Follow Us!