Fred Clark has a great post on Biblical inerrancy, and the fact that it cannot deliver what its proponents claim that it can. He writes:

I don’t just mean that it’s a poor hermeneutic that encourages self-deception and projection and semi-conscious eisegesis, although that’s all true too.

I get the attraction there, and why the idea is appealing. Who wouldn’t want such a thing — an accessible arbiter, always at hand, to definitively settle every dispute? We Protestants don’t have a pope to play that role, so why not enthrone the Bible as our infallible “supreme and final authority?”

The problem, again, is that this doesn’t work. We can’t instantly resolve our disagreements by turning to the Bible when those disagreements are about what the Bible means.

That’s why the Bible can never be, and never has been, a self-evident “supreme and final authority.” It cannot magically sweep away the “epistemological crisis” of being human because it’s a bunch of us humans who are trying to read the thing.

And the ending of the post is pure gold, too:

This same pattern is repeated wherever any group of “inerrantists” gets together and claims that their inerrant, infallible Bible will be their supreme and final authority. It doesn’t work. The arbiter fails to arbitrate and the definitive authority fails to settle all their questions.

And then, after that “statement of faith” swells to several thousand words — revised, amended and expanded in a race against ever-arising new ambiguities — they’ll realize that doesn’t work either, and they’ll supplement that supplemental document with additional abstracts of principles and manifestos and declarations.

This extracanonical canon of biblical inerrantists now rivals the original biblical canon in size, density, and — despite their best efforts — ambiguity. And every page of it is proof — definitive, final, supreme — that the epistemological certainty promised by inerrancy is a lie. 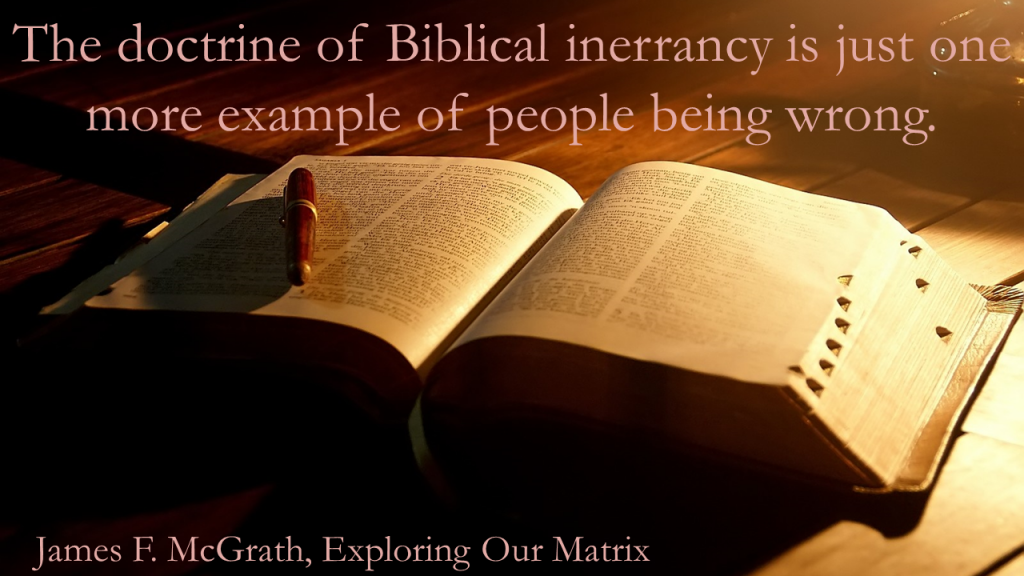 September 6, 2014 Does Christianity Disprove Mythicism?
Recent Comments
4 Comments | Leave a Comment
Browse Our Archives
get the latest from
Religion Prof: The Blog of James F. McGrath
Sign up for our newsletter
POPULAR AT PATHEOS Progressive Christian
1