The broken promise of biblical ‘inerrancy’

I don’t just mean that it’s a poor hermeneutic that encourages self-deception and projection and semi-conscious eisegesis, although that’s all true too.

What I mean is that the main attraction of biblical inerrancy — the first and last reason people are drawn to it — is that it promises them something it does not and cannot deliver.

Here is Southern Baptist Seminary president Al Mohler, a vocal champion of biblical inerrancy, summarizing an argument he presents endlessly as his trump-card claim for the necessity and sufficiency of this approach:

Without the Bible as the supreme and final authority in the church, we are left in what can only be described as the debilitating epistemological crisis. Put bluntly, if the Bible is not the very Word of God, bearing his full authority and trustworthiness, we do not know what Christianity is, nor do we know how to live as followers of Christ.

That’s from his chapter in the book Five Views on Biblical Inerrancy, as quoted by Chris Tilling who responds to that chapter with “Seventeen criticisms.” Tillings’ criticisms are smart and sharp — particularly his critique of Mohler’s “unevangelized” understanding of “truth” (which Tilling expands on here).

But here I just want to focus on that key broken promise: Inerrantists’ claim that their scheme makes “the Bible … the supreme and final authority in the church” and that inerrancy is solely capable of rescuing us from “debilitating epistemological crisis.” 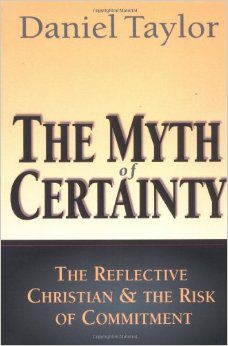 I get the attraction there, and why the idea is appealing. Who wouldn’t want such a thing — an accessible arbiter, always at hand, to definitively settle every dispute? We Protestants don’t have a pope to play that role, so why not enthrone the Bible as our infallible “supreme and final authority?”

The problem, again, is that this doesn’t work. We can’t instantly resolve our disagreements by turning to the Bible when those disagreements are about what the Bible means.

That’s why the Bible can never be, and never has been, a self-evident “supreme and final authority.” It cannot magically sweep away the “epistemological crisis” of being human because it’s a bunch of us humans who are trying to read the thing.

For an example of how the Bible fails to settle such disputes, look no further than to Al Mohler himself. When Mohler took over as president of Southern Baptist Theological Seminary, he didn’t appeal to the Bible as “the supreme and final authority” for the school’s faculty. The Bible, on its own, was inadequate. It was too ambiguous, too open to differing interpretations, to be of any help to Mohler in reshaping the faculty and curriculum of the seminary as he sought to do.

It did not simply require faculty to “teach in accordance with, and not contrary to, the supreme and final authority of the Bible.” If it had said only that, then the seminary would have been left in what can only be described as a debilitating epistemological crisis. Just ladling on more superlative adjectives — “inerrant,” “infallible,” etc. — wasn’t enough to turn the Bible into the definitive final arbiter Mohler wanted it to be. So rather than being able to point to the Bible as the “supreme and final authority” for Southern Seminary, he instead pointed to the Bible plus the Abstract of Principles.

Yet, alas, that still didn’t do the trick. So Mohler also required his faculty to affirm all XVIII articles of the “Baptist Faith and Message.”

This same pattern is repeated wherever any group of “inerrantists” gets together and claims that their inerrant, infallible Bible will be their supreme and final authority. It doesn’t work. The arbiter fails to arbitrate and the definitive authority fails to settle all their questions.

And then, after that “statement of faith” swells to several thousand words — revised, amended and expanded in a race against ever-arising new ambiguities — they’ll realize that doesn’t work either, and they’ll supplement that supplemental document with additional abstracts of principles and manifestos and declarations.

This extracanonical canon of biblical inerrantists now rivals the original biblical canon in size, density, and — despite their best efforts — ambiguity. And every page of it is proof — definitive, final, supreme — that the epistemological certainty promised by inerrancy is a lie.

September 5, 2014
If there's anywhere to be then you must be there
Next Post

September 5, 2014 Are you ready (to buy a T-shirt)?
Recent Comments
0 | Leave a Comment
Browse Our Archives
Related posts from slacktivist