The Case of the Severed Ear

I’ve been meaning for a while to blog about the story in the Gospel tradition, in which one of Jesus’ followers slices off the ear of the high priest’s servant in the garden of Gethsemane (Mark 14:47  and parallels). Larry Behrendt had two posts on the subject back in August, which I had meant to draw attention to before now. The first pointed out oddities in the story – for instance, Peter attacks a presumably unarmed slave, and yet the response of the arresting party does not involve the use of a sword against him. The second post considers interpretative options, and suggests that the most plausible explanation is that the incident never happened.

I’m not sure I agree – the difficulties are real, to be sure, but it is hard to imagine Christians, eager to depict themselves and their leader as not violent revolutionaries, making this incident up. Why would they have done so? Is it not more likely that the incident reflects something that actually happened, and the oddities of the story reflect an attempt to reinterpret the event?

It has long seemed to me that this incident might have had a significant impact on the way things unfolded for Jesus. If the arresting party was hoping to reason with Jesus and get him to avoid causing a stir during the feast that might draw in Roman troops, or if they were hoping at worst to lock him away until after Passover, they may well have been trying to avoid an eruption of violence, even when provoked. Moreover, for all we know, they may have subdued, or even killed, the person who sliced off the ear (assuming it wasn’t Peter), after which Jesus prevented his followers from doing anything further. Perhaps none or very few of the rest of them were armed. And perhaps this incident was a major reason why the authorities persecuted the subsequent Christian movement, more than anything they believed about Jesus.

Being interested in this subject, I was delighted to learn yesterday that Dale Martin’s work on it has been highlighted in Newsweek (HT Chris Keith). I look forward to reading the journal article mentioned there. Take a look at what he has to say, and what other scholars have said in response.

What do you think about the story? Did someone slice off the ear of the high priest’s servant in the Garden of Gethsemane? Why would someone invent it, if you think it was invented? And if there is a real incident in the background, what might be left unsaid in, or covered up by, the story as told in the Gospels? 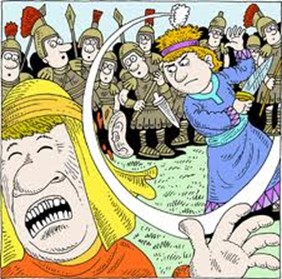